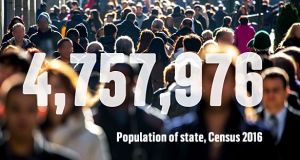 Figures published by the Central Statistics Office on Thursday show the total population is now 4,757,976.

Population change varied widely from a high of over 8 per cent in Fingal to a low of -1.5 per cent in Donegal. Among the fastest growing counties were the four administrative areas of Dublin, along with the commuter belt counties of Meath, Kildare and Laois and the cities of Cork and Galway.

Dublin city, Cork city and the administrative area of Dún Laoghaire-Rathdown were the only areas to experience net inflows of population of any meaningful amount, the CSO said.

The five cities of Dublin, Cork, Galway, Limerick and Waterford have all grown faster than their surrounding counties.

Presenting the figures at a briefing in Dublin, statistician Brendan Murphy said Cork city’s increase was explained by a very low number of births relative to deaths and a high number of people moving into the area.

The young populations of Fingal and south Dublin along with high birth rates also drove the population increases in those areas.

Most counties experienced some level of population growth, but three counties witnessed population decline over the five years, namely Donegal (-1.5 per cent), Mayo (-0.2 per cent) and Sligo (-0.1 per cent).

Three other counties grew by less than 1 per cent, namely South Tipperary, which increased by .72 per cent, Roscommon by .58 per cent and Leitrim which grew by just .55 per cent.

Blanchardstown-Blakestown in Dublin 15 had the highest increase in population with 2,867 more people living in the area than in 2011 - an increase of 8 per cent.

The electoral division with the single highest population increase in percentage terms was The Ward in Fingal with an increase of 27 per cent.

Tallaght-Springfield had a population increase of 21.3 per cent.

The CSO figures reveal that net migration has fallen sharply.

It said that after the natural increase in the population (births minus deaths) was taken into account, net migration over the five-year period was about -28,558.

This compares with net inward migration of 115,800 over the previous five years. The preliminary results show the majority of counties experienced population loss to migration, but the figures vary widely from a low of -6,731 in Donegal to a high of 7,257 in Dublin city.

The CSO said, however, that the net migration estimate should be treated with caution until a great level of analysis can be conducted on the final census results.

Net migration estimated in this way also includes variations in the number of visitors in the State on census night and the number of Irish residents temporarily abroad.

Senior statistician Deirdre Cullen said a “small number” of people had refused to cooperate with the census and would be prosecuted.