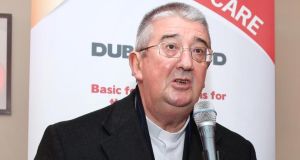 The housing charity behind a €17 million State-funded senior citizens’ complex has rejected claims that a rent dispute with Dublin City Council has delayed tenants moving into their new homes.

The council said it had been unable to allocate tenants to Fr Scully House, a new complex of 99 apartments near the junction of Gardiner Street and Mountjoy Square, because of the excessively high social housing rents sought by the Catholic Housing Aid Society (CHAS).

The society received 100 per cent funding under the Capital Assistance Scheme (CAS) to build the apartments. Under its terms, the society must agree an “economic rent” with the council and the council can nominate tenants on its social housing waiting list to 75 per cent of the units, while 25 per cent are chosen by the society.

The council’s housing department said it had been in negotiations with the society since July, but had been unable to agree an economic rent for the apartments. The council said it could not say how much the society wanted to charge as talks were ongoing but, while €66-€68 was the average weekly CAS rent, the society had proposed a “significantly higher” sum.

“Consequently, suggestions that a dispute over rents with Dublin City Council has delayed tenants from moving into Fr Scully House are simply not true. CHAS has met with Dublin City Council to discuss a range of matters including rents. These meetings form part of regular ongoing discussions which would normally take place in relation to a project of this nature.”

Earlier this week Minister for Transport Paschal Donohoe said it was “appalling” that the facility was vacant given the housing crisis in the city, while Labour TD Joe Costello called on Catholic Archbishop Diarmuid Martin to intervene.

Speaking on RTÉ radio, Dr Martin said he had tried, but had been unsuccessful. “I’ve been in touch with the organisation and the only answer I’ve got is that despite their name they consider themselves to be a non-denominational housing aid society with no links to any church or domination. They have to run their own business but if they’re not Catholic they should drop the name.”

Separately, Dr Martin said a diocesan building would be made available before Christmas to provide shelter for between 30 and 40 homeless people in the north inner city. He said he had been in touch with the homeless executive following the death of homeless man Jonathan Corrie and he hoped the building would be in use as soon as possible.