Catholic Church ‘will pay price’ for stance on gay marriage 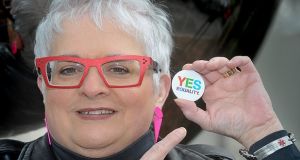 A conference discussing the religious case for marriage equality has heard there will be “a price to be paid” by the Catholic Church for its stance in relation to the upcoming referendum.

Marriage Equality: The Religious Case for a Yes Vote took place on Saturday and was hosted by Faith in Marriage Equality at the school of ecumenics, Trinity College Dublin.

Sociologist Dr Richard O’Leary told the conference there was a danger of a “smaller, more anti-gay” church emerging from the public debate in relation to the referendum.

“I predict there will be a price to be paid by the Catholic Church after this referendum,” he said. “Because of the negative stance taken by the bishops, the church as an institution could emerge as a smaller, more anti-gay, more conservative denomination. Some of the bishops might be satisfied with that outcome, but many people might feel that it would be a regrettable and avoidable outcome.”

Church of Ireland bishop of Cashel, Ferns & Ossory Michael Burrows said he was supporting a yes vote in the referendum and referred to gay rights as “the great justice issue of our time”.

“I have long believed that the churches should take the trajectory of human rights law very seriously – all too often we have allowed ourselves to be left behind defending the essentially indefensible,” he said.

“The call for same sex marriage is a logical and timely development in the march of law reform and equality.

“I am convinced that it will be a contribution to a fairer and more truly equal Ireland, and I cannot see any way in which it could be considered repugnant to the common good, or indeed to the vital role of the family.

“I have come to believe that the rights of gay people have become, very properly, the great justice issue of our time just as the abolition of slavery and the emancipation of women were in the past. I could not vote against this proposal because of my utter abomination of homophobia.

“I have come to feel that homophobia must be fought in our society as an evil.”

“This debate is being framed as religious people being no voters with everyone else voting yes. This couldn’t be further from the truth. People of all faiths support sharing the freedom to marry with gay and lesbian couples.

“The Christian tradition affirms the fundamental equality and dignity of all people, whether we are heterosexual or gay. Faith leaders should not marginalise or exclude people who are gay rather they should promote equality and inclusion.”

She also highlighted the “progressive elements” within religious traditions, which she argued can be marshalled in support of a yes vote in the referendum. Among them were “concepts of dignity, justice, equality, human flourishing and well-being”.

“This is the basis on which the moral case for marriage equality based on religious values can be established,” she added.

Rev Canon Dr Ginnie Kennerley said the stance adopted by religious institutions may be related to “conflicts between factuality and scripture”.

“There has always been disagreement on what is and is not permitted by the bible,” she said. “There have been conflicts between factuality and Scripture as we have understood it down the centuries – over the flat earth, over slavery, over evolution, over apartheid, over the position of women.”