Carrickmines fire: ‘They are still just stunned, in shock’ 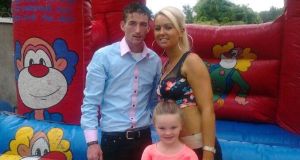 Willie Lynch, Tara Gilbert and Jodie (9) who died in the fire in Carrickmines.

Two boys, aged 14 and six, whose parents Sylvia and Thomas Connors died in the fire at Carrickmines on Saturday morning, remain in hospital. One is in a stable condition, the other in a serious but stable condition, according to a statement from Southside Travellers Action Group (Stag).

Families and friends of the five adults and five children who died in the fire continued to gather at the Stag premises in Sandyford yesterday, as more family members travelled from Wexford and Belfast. Family members are also coming from England.

A spokeswoman said they were continuing to work with officials from Dún Laoghaire Rathdown County Council about housing the 15 people who have been made homeless by the fire.

A prayer service was led at the Stag premises yesterday by Fr Derek Farrell of the Parish of the Travelling People.

Margaret O’Leary, a cousin of the Connors family, said the family was “devastated “ and “angry”. Ms O’Leary, who also works for Stag, said she had received a call at 7am on Saturday telling her about the fire.

“As a mother I am devastated,” said Ms O’Leary. “These were my mother’s first cousins. Some of us were out on Friday night at a fashion show in Dundrum Town Centre, for social inclusion week, and it had given us all such a boost.

“We had gone to bed so optimistic, feeling good and then to wake up to this, it’s unbelievable.

“They were just beautiful, lovely families. The site up there, they had it spotless, really nice, flowers and everything.”

However, Ms O’Leary said the families had been living in portable buildings.*

“ If they were living in bricks and mortar I’m sure some of them could have been saved. The families here are devastated and angry too. I’m angry.”

He said progress on the provision of accommodation was too often thwarted by problems locating and then funding sites.

Flooded Co Clare village evacuated as rainfall warning issued for most counties 15:07
‘The IRA has gone and they are not coming back. That’s the reality’ 15:06
Sinn Féin to hold public meetings around country to rally support for government efforts 10:59
Gardaí wish to speak to taxi driver after girl dies in Cork car crash 10:08
Viable device left in Armagh residential area could have been ‘devastating’ 19:40

1 Flooded Co Clare village evacuated as rainfall warning issued for most counties
2 Portraying Sinn Féin as a dangerous party is a political strategy
3 Coronavirus: Global concern grows with sharp rise in infections outside China
4 When the RIC opened fire on a crowd in Ennis during the Clare grain riots
5 ‘The IRA has gone and they are not coming back. That’s the reality’
Real news has value SUBSCRIBE