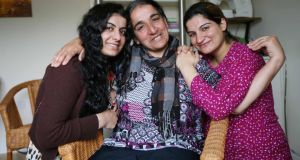 Fawzieh Amiri with her daughters Dema and Kajal. They are all members of the Kurdish community in Carrick on Shannon, Co Leitrim. Photograph: Brian Farrell 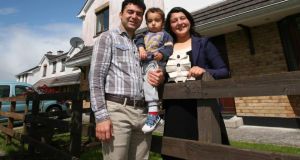 Halala and Mero Ahmadi with their son Jamil outside their home in Carrick on Shannon. They are all members of the Kurdish local community. Photograph: Brian Farrell

The Kurdish community knew they belonged when the shops in Carrick on Shannon closed their doors and local people lined the streets after the death of 21-year-old Jalal Azizi in March 2012.

The weather had been fine and three young lads decided to swim across the river Shannon. Sr Nora Burke flinches when she remembers the anguish of Jalal’s family in the aftermath of the drowning. In the aftermath, Carrick locals rallied around the family. Young people and teachers who knew Jalal and his twin brother Jabar at Carrick Community College carried white roses when the hearse moved through the town, pausing at the family home in the Lis Cara estate.

A year later when an oak tree was planted in memory of Jalal close to the river, Joe and Rosie Dolan from the Bush Hotel were present. A few months before Jalal drowned, their 20-year-old son Andrew died following an unprovoked assault. Andrew’s mother sometimes bumps into Jalal’s mum, Khawar Allakarami. “We always hug when we meet. She chatters in her language, I chatter in my language – we understand each other,” says Rosie.

As UN Secretary General Ban Ki Moon this week applauded the government’s decision to send the LÉ Eithne to help rescue refugees in the Mediterranean, a Kurdish community in Carrick on Shannon were recalling their own escape to Leitrim less than a decade ago, conscious of so many millions still displaced around the world.

The community arrived in Leitrim in 2006 under a UN-supervised resettlement programme, after what for many, had been a lifetime running from conflict.

Halala Ahmadi, like Jalal Azizi, was born in the Al Tash refugee camp in Iraq and was 15 when she arrived in Carrick. After getting a honours degree in international marketing at IT Sligo , she is about to start a master’s at the Institute of Technology in Dundalk.

Understandably many things seemed strange in her new home back in 2006. “The most amazing thing was the people in Carrick,” said Halala. “People said ‘hi’ to us on the street. They could not know how much that meant to us – we thought we would be isolated.”

Tom Lavin, the now retired chief executive of the Leitrim Partnership, the agency charged with co-ordinating the local response to the arrival of the Kurdish refugees, remembers that initial sense of isolation.

On their first day in the town, some local people turned up at the Bush Hotel to meet the new arrivals.

“We were aware that these people had quite literally run for their lives,” says Lavin. He remembers the “fear in the faces” of the elderly men who clutched what looked like rosary beads, their heads bowed, at the back of the room.

A slew of agencies including the Health Service Executive, VEC, Fás, Leitrim County Council and the Department of Social Welfare were mobilised but Lavin said it was local people like Kathleen Coleman, Kathleen Flanagan, Bernie Donoghue, the Dolans and the Mercy nun Sr Nora Burke who made valiant attempts to help the Kurdish people settle.

Lavin knew a little Arabic, from his time in Sudan with aid agency Concern, which helped break the ice. “I was able to greet the older refugees who had no English and that put a smile on their faces”.

Everyone in Carrick seems to know Fawzieh Amiri the smiling matriarch with eight children, who were born in Iraq, Jordan and Ireland. She helps out at the Breffni family centre. Her youngest son Komar, now nine, “is my little Irish man”. Fawzieh recalls how Sr Nora Burke kept coming to her home to teach her English, giving her the confidence to mix with the local community.

Halala Ahmadi’s mother and Fawzieh were pregnant when the two families were forced to flee Al Tash camp after the outbreak of the Iraq war in 2003. “There were 16 people in one car,” says Halala. Fawzieh pats her knees to explain that she had two small children on her lap during that bumpy journey across the desert.

“We were afraid for our lives because we were in the middle of a war. We did not know if a bomb could explode,” says Halala.

The families had spent 25 years in the Iraqi camp which Halala says was like a prison with a fence surrounding the 15,000 or so residents, who had been driven out of Kurdistan during the Iranian revolution in 1979. They had no papers, no possessions, no running water and no access to education or health care.

When the weary group got to the Jordanian border, local soldiers told them to go back as the camp there was full. “We told them we had nowhere to go”.

A group of US soldiers intervened and got them across the border. “I remember the American soldiers – they gave us lollipops,” recalls Halala.

In the camp in Jordan, her parents and Fawzieh encouraged their children to grab every opportunity to learn English from anyone who had a grasp of the language. When Irish embassy officials visited the camp to select refugees for the resettlement programme Halala knew that she would have to make up for the disadvantage of not having a family member already in Ireland. “I did not even know where Ireland was but I shook hands with the Ambassador and I spoke to him in English – I now know it was terrible English but I wanted to make my dad proud,” said Halala. Her plea on behalf of her family worked. “The Ambassador said to me ‘I will see you in Dublin’ and six months later he did”.

Kathleen Coleman knows that not everyone in Carrick was over the moon when the Kurdish group of about 100 arrived to a town which had already become home to emigrants from several countries. “A lot of local people started sending their children to the gaelscoil but not because they were interested in Irish,” she says. With so many different nationalities being catered for in the school, locals feared that their children were not getting enough attention, she says.

Sr Nora Burke remembers bringing members of the group to Dublin to meet her Order and how proud she was when Fawzieh’s daughter Kajal told the nuns “My life began when I came to Carrick”.

Local Fianna Fáil councillor Sinead Guckian said that in the beginning integration was hard especially for the men. “We have Kurdish books in the local library now and we recently had a day at the Dock to celebrate their New Year,” she says.

Fawzieh and three of her children went home a few months ago so that she could meet her mother for the first time in 25 years. “I was happy but I was very very sad because she did not know me,” says Fawzieh explaining that her mother has dementia.

Halala Ahmadi wonders why Kurdistan isn’t higher on the international news agenda. “When IS killed a US journalist the whole world knew but they killed 17 Kurdish Peshmerga and nobody said a word”.

“It is an absolute pleaure working with these people,” said Bernie Donoghue of the Leitrim Development Company whose speciality is social inclusion. “They love being involved with the community”.

Fawzieh Amiri laughs when she recalls how her children got homesick for Ireland when she took them “home” last March. “They say ‘I am not Kurdish – I am Irish’ ”.