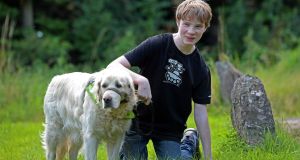 A 17-year-old teenager with cerebral palsy has been awarded €5,500 after his former primary school discriminated against him on disability grounds by refusing to allow him bring his assistance dog into the school.

In its ruling, believed to be the first of its kind involving an assistance dog in a school, the commission ordered the school to redraft its policies to ensure it complied with the law. The deciding equality officer said the school must report to the Irish Human Rights and Equality Commission (IHREC) on the progress on this within a year.

If it did not do so, the IHREC may, with the consent of the complainant, apply to the District Court for an enforcement order. The commission heard the case in July last year, but has only published its decision in recent days.

Equality officer Orlaith Mannion of the commission suggested the school engage a disability consultant in relation to the matter.

Luke was aged 12 and in sixth class when he obtained the stability dog, Aidan, in November 2011. He had been moved up the waiting list by the Irish Dogs for the Disabled charity after a deterioration in his condition and his balance due to a growth spurt. Prior to the arrival of the stability dog, Luke’s parents had three meetings with the school principal, who has now retired. His mother said his teachers were “very supportive” of the imminent arrival of the dog.

The principal later approached Luke’s mother Pauline Kelly-Melia , however, and said he was not happy with the dog coming into the classroom. He insisted the parents formally write to the board of management seeking permission.

At the commission hearing, Ms Kelly-Melia submitted that the principal had said the boy was not affected by health and safety issues because he had a full-time special needs assistant. Luke’s parents ultimately took him out of the school and home-schooled him from before Christmas in 2011 until the end of the school year the following June.

At one point, the principal told his parents that if it was their intention not to send Luke to school, it would notify his absence to the National Education and Welfare Board.

Irish Dogs for the Disabled, which owns Aidan, submitted a certificate of insurance to the school board of management showing it had liability cover of €6.5 million. Ms Mannion said the law required an educational establishment to do all that is reasonable to accommodate the needs of a person with a disability.The school had been correct to pose questions.

“However, they took an obfuscating and closed-minded approach to the request.”

Solicitor Aisling Glynn of McMahon and Williams Solicitors, who took the case to the WRC for Luke, said: “This brave and capable young man and his family are delighted with the decision and feel completely vindicated having taken on the system which let them down.”

She said the decision of the Workplace Relations Commission was “very clear” and recognised Luke’s stability dog as a mobility aid.

“It has been established that the failure to accommodate this young man, at the time just a child, with his stability dog amounted to discrimination on the ground of disability.
“The case had established “a new precedent for users of stability dogs and provided new reassurance for people of all ages with disabilities who rely on this essential and life changing service”.

Ms Glynn said she hoped the decision would be of assistance to others and that it would ensure this injustice was never repeated.
“It has been a long route to justice for a young man at such a formative age and it’s a relief that this case has finally concluded, although not without a final puzzling element, that of an anonymised judgment when full disclosure had been specifically requested,” Ms Glynn added.

Donations to the Irish Dogs for the Disabled charity, which runs almost entirely on a voluntary basis, are down by 35 per cent since the funding scandal at the suicide charity Console.

Jennifer Dowler, chief executive of the Cork-based charity, said donations had dropped by about €64,000 so far this year due to what she believed was a negative perception of charities by the public.

“You can understand why people are concerned – I get that. But it’s our lifeline. People need to ask more questions and get to know charities.”
The charity currently has about 200 dogs in various stages of breeding, training and socialisation in 120 partnerships around the country.

“We are delighted with the ruling because it has taken a very long time to get this result,” Ms Dowler said.