Ali Hewson calls for migrants to be given respect and safety 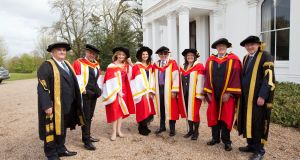 The University of Limerick conferred honorary doctorates on six exceptional individuals from the worlds of humanitarianism, business, the arts and the public sector, including Ali Hewson. Photograph: Seán Curtin FusionShooters

Ali Hewson has urged governments to treat migrants with respect and to ensure they are given a safe place to live. Speaking at the University of Limerick where she received an honorary doctorate in recognition of her charity and humanitarian work, the wife of U2 singer Bono said: “We were just in Jordan and Kenya on the border of Somalia where there are migrants coming from Somalia who have been there for 25 years in camps. We have to learn how to deal with people nowadays. Four years ago, it was 10,000 people being chased out of their houses, now it’s 40,000 a day. It is crazy.”

“This is something that has to be resolved. The way forward is to be inclusive; it’s an issue we have to look at and we have to make sure everybody has a chance at having a home, having a life and having a future.”

The University of Limerick conferred honorary doctorates on six people from the worlds of humanitarianism, business, the arts and the public sector.

Accepting her honorary degree of doctor of letters, Adi Roche, founder of the Chernobyl Children’s Project International, paid tribute to the “army of people” who work behind the scenes providing crucial medical and other vital services.