Alan Kelly pledges beds for all Dublin homeless by Christmas

Number of emergency beds for rough sleepers to rise by 220 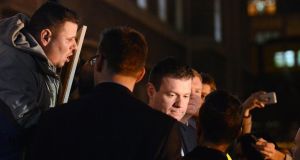 A protester holds up a sign as Minister for Environment Alan Kelly talks to reporters at the end of the forum on homelessness which took place at the Custom House on Thursday. Photograph: The Irish Times/Dave Meehan 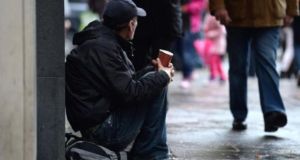 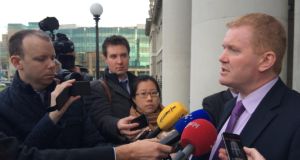 Minister of State Paudie Coffey speaks to reporters ahead of a forum on homelessness in Dublin today. Photograph: Cyril Byrne/The Irish Times

All homeless people sleeping on Dublin’s streets will be offered beds by Christmas, Minister for the Environment Alan Kelly has said.

He was speaking after meeting more than 50 delegates involved in the sector to explore measures to alleviate the Dublin homelessness crisis.

The meeting was convened following the death of homeless man Jonathan Corrie (43), a short distance from Leinster House earlier this week.

The number of emergency beds allocated for rough sleepers in the city would be immediately increased by 220 a night, Mr Kelly said.

He also said the four local authorities in Dublin are being directed to give 50 per cent of their accommodation allocation over the next six months to people who are vulnerable or homeless.

“In the city of Dublin by Christmas there should be no reason for anybody to sleep rough,” Mr Kelly said.

“If they want a bed, if they want accommodation, it’ll be there for them if they so choose.”

However, Lord Mayor of Dublin Christy Burke, who attended the meeting, said he believed it possible to get rough sleepers off the city’s streets in the next seven to 10 days.

“The day of procrastination is over, the day of talking is over,” he said. “It’s a day of action, and let’s hope action takes place.”

Mr Burke said accommodation that could be used by homeless people was available. “There’s some hypocrisy around when you decide to open homeless shelters and some politicians are out of the traps saying, ‘Not in my backyard’. That needs to stop.”

Medical teams needed to be included to deal with mental health and addiction problems, he said. “It was heartbreaking to listen to Jonathan Corrie’s daughter and son ... saying he’d tried to get help from addiction services for years,” he said.

The forum heard from the city’s political, administrative and religious leaders, as well as 29 representatives of homeless and housing charities and advocacy groups.

“We haven’t got all the answers,” said Catholic Archbishop of Dublin Diarmuid Martin after leaving the Custom House. “But it was very honest, and I think the Minister showed clearly he wanted something done.”

Dr Martin said the Homeless Executive is inspecting the church-owned building he volunteered as accommodation facilities.

Speaking on his way into the meeting, Church of Ireland Archbishop of Dublin Michael Jackson said it was important people worked urgently towards a structured solution. “And I think to begin to do that, in light of the human tragedy, is better than not trying.”

Sean Moynihan, chief executive of Alone, the charity working with homeless older people, said more needed to be done to ensure accommodation was appropriate to its users.

Mr Moynihan what he wanted from the meeting was “just to make sure that some initiatives are taken to take people who are on the streets into housing, and people who are stuck in emergency [accommodation] get a move on, and there’s action taken in the immediate future”.

Pippa Woolnough of Barnardos said there needed to be a focus on child- and family-appropriate emergency accommodation instead of hotels.

“Emergency accommodation can be far from their schools, it’s very cramped, it’s not safe in a number of circumstances, it’s actually dangerous for children, so it’s extremely worrying,” she said.

“Because what may be a short time for an adult is a huge amount of time for a child.

“We need to focus on child- and family-appropriate emergency accommodation - it isn’t hotels far away from schools - that keep families in their communities, perhaps in buildings that are vacant.”

John-Mark McCafferty, head of social justice and policy at Society of St Vincent de Paul National Office said the target of moving all rough sleepers off the streets by Christmas was optimistic. “I think it’s very ambitious. Rough sleeping has been a facet of homelessness and homeless policy for many years. I don’t think it’s something that can be fixed in the next three weeks.”

Mr Moynihan added he thought it it was “possible to have the locations and beds for them, but whether all the rough-sleepers themselves can be encouraged in is another question”.

The first delegates at the meeting in the Custom House were the four Dublin local authority chief executives.

The final meeting involved representatives of almost 30 charities and voluntary organisations who work with and advocate for homeless people.