About 400 refused access to Dublin Castle for referendum declaration 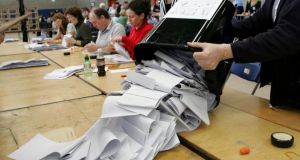 File photograph of the opening of a ballot box. Up to 400 members of the public have been refused access to Dublin Castle for the declaration in the same-sex marriage referendum. File photograph: Cyril Byrne/The Irish Times

Up to 400 members of the public have been refused access to Dublin Castle for the declaration in the same-sex marriage referendum.

The Department of the Environment has been inundated with requests to attend the count centre, but it can only allow 160 people inside.

The restrictions mean that 400 people have been declined access to the castle, where the result will be announced on Saturday.

Counting will begin in centres across the country from 9am, but the official result will be declared in Dublin Castle.

Mr Kenny said that the referendum had nothing to do with surrogacy and would not be a redefinition of marriage.

Mr Kenny said what was in question was an extension of equality to thousands of gay and lesbian couples.

The Taoiseach said: “There is nothing to fear from love and equality.”

Archbishop of Dublin Diarmuid Martin, who is voting No in the marriage referendum, said the vote was not just about marriage, but about family.

He said this referendum is fundamentally changing the definition of marriage.

Mr Martin said: “The Taoiseach said nothing will change, he can’t promise that.”