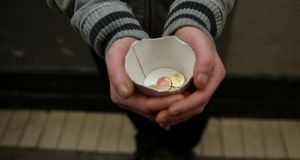 Just under 30 per cent of all families cited relationship breakdown as the cause of their homelessness. Photograph: Brian Lawless/PA Wire

Almost one-third of families who became homeless in Dublin in the first six months of this year lost their housing because of “relationship breakdown”, not eviction, according to new research.

According to the report from the Dublin Region Homeless Executive., more families are becoming homeless because of “family circumstances,” including overcrowded accommodation, and the breakdown of relationships between family members or partners, than are being served notice to quit by their landlords.

A total of 450 new families accessed emergency accommodation services in the first six months of this year, bringing the number of families living in hotels, B&Bs and hostels in Dublin to 1,115 by June. That number has since risen to almost 1,340.

These 450 families, who were accessing emergency accommodation for the first time, were asked during their initial assessment why they had become homeless.

Difficult “family circumstances” were cited by 49 per cent of all families, while another 47 per cent of families said they had problems with the private rented sector. The remaining 4 per cent gave a variety of other reasons, including having to surrender social housing or having their home repossessed.

Just under 30 per cent of all families cited relationship breakdown as the cause of their homelessness. Of the 132 families giving this reason, 42 said it was a “general” problem with others in their accommodation, while 56 said their relationship with their parent had caused them to leave the family home.

Thirty four said their homelessness resulted from the breakdown of their relationship with their partner.

In the “family circumstance” category, 40 said they had been living in overcrowded accommodation, while 33 listed “general family circumstances” as the reason for their homelessness. Two people said it was due to a “family reunification” where family members from abroad had joined them in Ireland, changing their housing needs.

Of the 199 people who cited problems with the private rented sector, 114 had been given notice to quit for “general reasons” with the next most common reason being the sale of the property (25 families) and eviction because of rent arrears (24 families). Only two families said their eviction had been illegal or invalid.

Fianna Fáil councillor David Costello said the research revealed a gap between perceptions of the causes of homelessness and the reality.

“A lot of people think it’s bad landlords putting people out that’s causing the trouble, but the council experience is that a lot of it is either family breakdown or overcrowding.”