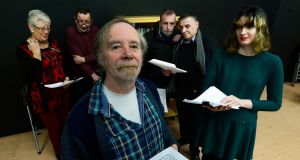 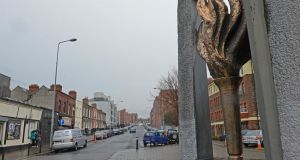 A memorial to those who died as a result of drug taking at Upper Buckingham Street, Dublin. Photograph: Eric Luke

In the mind of their creator, Gus and Molly live in Ballybough, the north-eastern edge of Dublin’s north-east inner city.

They are characters in Under Pressure, a play about threats and menaces in that part of Dublin, which has been developed by people who live there. It attempts to reflect one particular aspect of what has been crippling the community for decades – illegal drugs and what flows from them.

At the end of a more than usually bad year for the area, Under Pressure is in tune with its time.

The people behind the play are rehearsing in a room of Marino College on the North Strand, chivvied by director Owen O’Gorman and long-time community worker Mick Rafferty. They include the author of the original story Marie Feighery, friends and neighbours, retirees many of them, but including also a house painter, a reformed addict and a couple of students.

Rafferty has spent more than 35 years as an activist in the area and it is probably appropriate that at this stage in his life he plays the Garda superintendent in Under Pressure.

“The play is about how this family, and indeed how the community, respond to a threat,” he says.

Gus (played by Joe Fitzgerald) and Molly (played by Feighery) are watching soaps on the telly when there’s a huge clatter out back. Molly looks in the hall and lets out a loud scream. Two men in balaclavas, Git (the ‘t’ is silent; his name spat out like a curse) and Nailer (Casey Waldron), bring her back into the living room.

“Your son has been a naughty boy,” says Nailer. “He owes us two grand and now that debt is your debt.”

Gus protests that they don’t have that sort of money. Molly says they must have the wrong house.

The two thugs tell the terrified parents that “this is just business”.

“You know how it is,” says Nailer, “if you let one get away with robbery, they’ll all rob you. The boss says you got to draw the line somewhere.”

Gus and Molly are told that if the €2,000 isn’t forthcoming pronto, Simon will end up in the canal.

“You just have to decide if his head will be attached,” Git (played by Dave McDonald) says helpfully.

The play is firmly rooted in the reality that many people living in the north-east inner city face day in, day out.

“It’s based on things that have actually happened, several times, and on people who know what’s happened,” says Feighery.

Intimidation and the transference of debt from a non-paying addict to another member of their family are not uncommon.

“We know many cases of people having to sell their houses, or somebody using their redundancy money, just to get a relative off,” says Rafferty.

In his estimation the hallmark of this year’s gangland feud has been its full-on nature and the absence of even a code between criminals.

“There aren’t any laws now, there’s no respect and what shocked people, I think, beside the innocents being shot, was the relentlessness with which they took out all the Hutch family. People who weren’t involved in any criminality – I know that’s hard for people outside [the area] to believe – people who may have had misdemeanours when they were young – and there’s no one in this area who hasn’t had a brush with the law – and just the cruelty; the way it happened: in front of children and their wives, in front of customers in a pub, it was like a possession.”

The play captures many of the component aspects of what is going on in reality – betrayal and double dealing among the criminals; casual, easy recourse to extreme violence; community intimidation; and the disparity of wealth between places such as Sheriff Street and the IFSC legal and banking area, itself a ghetto.

The central character is the Professor – “he did a few degrees in prison,” says Rafferty, “and he speaks. . .

“Yeah,” agrees Rafferty. “Very Blackrock-y” and they all laugh.

The play tries to reflect the sense of helplessness people feel in the face of the threats, intimidation and extortion.

“People are going to the cops and the cops are saying, basically, pay them,” says Feighery.

“They say, we can’t protect you, just pay them,” says Feighery.

The penultimate sentence in the play belongs to Gus who, in his grief, rails against societal abandonment.

“I’ll haunt these bloody politicians until they deal with this scourge in our community,” he says.

Under Pressure will be staged in March 2017, as part of the Five Lamps Arts Festival, in the Sean O’Casey Community Centre Theatre – seanocaseycommunitycentre.ie – on St Mary’s Road, East Wall, Dublin.

The Professor lives there with his librarian girlfriend, Nuala, “my book worm beauty” he calls her, and has the air of a southside upbringing.

“Hard to believe isn’t it?” the Professor says to Git. “You see that apartment block, that’s where Bridget’s Gardens used to be, where I lived. First balcony beside the stairs, the middle block.”

The Professor and his enforcers cook up what he terms Operation Menace. An example needs to be set. Simon Holland owes and isn’t paying.

“It’s important that a clear message goes out to our customers, to our rivals, to those do-gooders who threaten us with their anti-drug projects,” the Professor tells Git and Nailer. “This is not about the pittance he owes us. This is a line in the sand to assert control. . .”

Things don’t end well for the hapless Simon. But neither do they for Git.

Tapping into the “no rules among thieves” theme of the play, having extracted the €2,000 debt from Gus and Molly, Git and Nailer go back for €1,500 more but don’t let the Professor know . . . until Nailer betrays Git.

“The bollix,” says the Professor. He orders Git’s killing – “make it spectacular, know what I mean?” he instructs Nailer. “Give him his just deserts and remember the Bertie method, no trail.”