Some 2,500 food bags had already been handed out to people queuing in cold and rain

Archive Dec 2016: About 3,000 people, including elderly people and children, queue for Christmas food parcels at the Capuchin Centre in Dublin 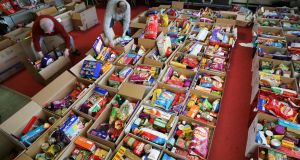 Food parcels: for many of those queuing on Thursday, it was their first time seeking help. Photograph: Frank Miller

A food bank in Limerick ran out of food parcels after handing out 2,500 of them to struggling families and individuals in the city on Thursday.

The service, run jointly by the Redemptorist order and St Vincent de Paul, has been operating since the 1970s. However, for many who stood in the freezing cold at St John’s Pavilion, it was their first time seeking help.More than 100 were turned away.

“We ran out of food and we had to turn 150 people away,” said Lorraine Moroney of St Vincent de Paul. “We’re trying to organise a team to pack and distribute 300 more hampers tomorrow from noon to 1pm.”

Sandra Carr, from Garryowen, who queued in the cold and rain at the food bank with daughter Nicola (13), said: “It’s my second year doing it. I do it to help myself and my family. Usually there’s beans or chicken, or there could be Christmas cake. At the moment I’m separated and I’m on my own with six kids and I need quite a lot of help. It’s tough . . . My mam and dad and my two sisters have all passed away too, so it’s been very tough on me.”

Despite it all, Sandra (41) promised Nicola: “Christmas is going to be good. We’ll have presents. Santa is coming.”

“I’m looking after my daughter and her two children,” she said. “I have to come here. I’ve no choice.

“I’m collecting the bag as I have my daughter living with me and she has two children and is pregnant with her third. It’s my first time here, ever. I’d be delighted with anything they can give me, to tell you the truth. I don’t care what’s in [the bag].

“Money is tight, especially when I have to come to places like this, that I never came to before . . . I’m not saying it’s degrading, or that I’m better than anyone else, but it is hard.”

Earlier, about 30 members of the Defence Forces based at Sarsfield Barracks, as well as volunteers from the financial services company Northern Trust and accountancy firm Grant Thornton, helped transfer 2,500 food bags from a warehouse to the food bank at St John’s Bingo Hall.

Redemptorist Fr Seamus Enright, who has been involved with the food bank for the past 15 years, said: “About 6,000 hampers have been delivered. We spent around €120,000 on the food this year. It was all raised by donations, so people are very generous.”

Each of the hampers contained about 20 items, including Christmas cake, crisps, chocolates, sweets, jelly, sugar, porridge, vegetables and beans. Toys were also provided to families by the Redemptorist order.

“I thought, with the upturn in the economy this year, that the demand for our help wouldn’t be as bad, but I don’t see that. A lot of people have been left behind,” Fr Enright said.