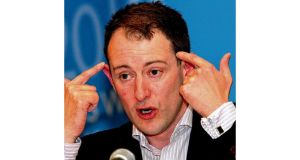 The Government will today announce its most substantial research awards to date with seven major projects and initiatives sharing an estimated €300 million in funding and in-kind contributions from the State and from private industry.

The awards will be announced today and will help fund research projects for six years across many of the 14 areas that have been identified for national prioritisation.

The seven projects involve consortiums and groupings from universities and from industry and include projects in medical devices, diagnostics, processing technologies, marine renewable energies, food for health, and data analytics management including ‘big data’.

Minister of State for Research Seán Sherlock (above) said yesterday that the ratio of State to private funding would be roughly two to one.

He said it would allow the Government to help forge a greater degree of real and strategic collaboration between academic institutions and also of industry.

He instanced big data which he said concerned networks of the future and would necessitate focused research and analytics to achieve more informed policy outcomes.