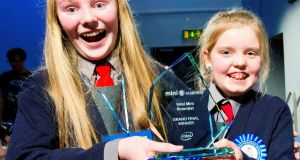 Balloon-and-bottle steam engines, papier-mâché lungs and bicycle-powered phones were all on display as finalists gathered for the Intel Mini Scientist awards showcase in Dublin on Friday.

It was a case of double delight for Timahoe National School, Co Laois, as its pupils claimed a second consecutive top prize, with their “Labrador Leaps” computer game for blind and visually-impaired players.

Sinead Buggy and Laura Miller, both in sixth class at the school, came out on top at the ceremony in Trinity College Dublin’s Science Gallery, against a tough field comprising 21 other projects.

They were presented with a trophy and a €1,000 cheque for their school by Minister of State for Skills, Research and Innovation Damien English.

The two were joined at the event by pupils from St Joseph’s School for Children with a Visual Impairment, who had helped to trial the game.

“The idea of the game is that there is a labrador and he runs across the screen and he jumps over a cat, but there’s a couple of bones in front of every cat and the bones make a noise to alert you to when the cat’s coming,” explained Sinead Buggy.

“We read a story about blindness which got us thinking about it, and then we surveyed our class to see what their favourite pastime was and one of them was video games,” she said.

“I wouldn’t be able to code or make a game but it’s easy for them,” said their teacher Martina Mulhall, who supervised the project.

Students from Wicklow Montessori Primary School claimed the joint runners-up prize for their project on lungs, with students from Ennis National School, Co Clare, for their entry on a system for charging mobile phones by harnessing the kinetic energy of bikes.

Event organiser Sarah Sexton, from Intel, said she was encouraged by the amount of projects that included a technological element.

“Children at this age are not afraid to ask, that natural curiosity is abundant in them and [the event] is really trying to tap in to that,” she said.

“We do this for this age group because we think that when they’re forming preferences between eight and 11 years of age, they’re the kinds of things that will shape them for the future.”

One such tech-inspired entry was a project that explored learning methods.

For their entry, Vivienne Dowd and Katie Mullins, from Newtown National School, Co Kildare, created an app on learning styles.

“We created an app which has information about auditory, visual and kinaesthetic learning.

“It has our advice to teachers on how to incorporate the three learning styles, and there’s a test to see what learner you are,” said Vivienne Dowd.

It attracted 2,000 entries from 105 schools, with the winners from each school going through to regional finals and then the grand final.