Solar plane takes off from Japan for Pacific crossing

Solar Impulse 2 left Nanjing China for Hawaii, but faced ‘a wall of clouds’ 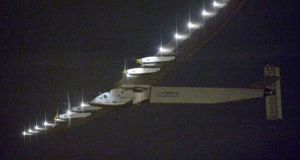 The Solar Impulse 2 flies over Nagoya Airport after taking off in Toyoyama, near Nagoya in Japan. Photograph: AP

A solar-powered plane took off from Japan on Monday on the seventh leg of its journey round the world, a trans-Pacific crossing expected to be the toughest part of the trip.

The Solar Impulse 2 left Nanjing, China, on May 31st for Hawaii, but was forced to cut short its bid a day later due to what pilot Andre Borschberg termed “a wall of clouds” over the Pacific and land in the central Japanese city of Nagoya.

Its departure was postponed several times due to poor weather, once last week with the plane - which bears 17,000 solar cells across its wingspan - on standby at the end of a runway.

“This is a one-way ticket to Hawaii,” organisers said on their website on Monday, eight hours after the plane’s pre-dawn departure.

“Andre Borschberg ... must now see this five-days-five-nights flight through to the end.”

The plane took off from Abu Dhabi in March on the 35,000km global journey. Overall, the trip was expected to span approximately 25 flight days broken up into 12 legs at speeds between 50 and 100 km/hr.

The plane is only as heavy a family car but has a wingspan as wide as the largest passenger airliner.

Studies, design and construction took 12 years and a first version of the craft rolled out in 2009 broke records for heights and distances travelled by a manned solar plane. Reuters