So saturated fat is okay again? Not so fast

A recent study into fat is not a green light to load up on steak and butter, one nutrition expert warns 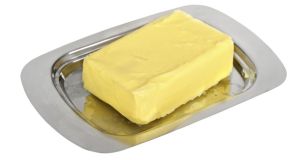 Today I return to the merry-go-round of nutritional advice on healthy eating. You have long been told that saturated fat, found for example in butter, meat and cheese, causes heart disease. However, a big new international study – by Dr Rajiv Chowdhury and others, Annals of Internal Medicine (2014) – has found no evidence that eating saturated fat increases the risk of cardiovascular disease. I would advise that you note this information with a wry smile and file it away for future reference rather than lashing with gay abandon into regular large steaks with floury potatoes smothered in butter on the side, and followed by a comprehensive cheese plate.

The latest study was a systematic review and meta-analysis of almost 80 published studies involving over half a million people. Some of these studies assessed what people ate and some measured fat levels in their blood, and all reported cardiovascular disease outcomes. The overall finding was a surprising lack of relationship between any type of saturated fat, or for total saturated fat intake, and cardiovascular disease risk. The only exception was a slightly increased risk (16 per cent) for intake of “trans fats”. Also, no evidence was detected of a protective effect from eating the types of fats thought to lower cardiovascular disease risk, specifically unsaturated omega-3 fatty acids.

What are we to make of all this? This new research has strongly challenged the conventional nutritional wisdom that saturated fat is inherently bad for you. The lead author of the research, Rajiv Chowdhury of Cambridge University, is quoted in a New York Times article by Anahad O’Connor in March: “My take on this would be that it’s not saturated fat we should worry about.”

The type of LDL cholesterol raised by ingestion of saturated fat is an LDL sub-type of big fluffy particles that are thought to be relatively benign. The smallest, most dense form of LDL is more dangerous, in that it is more likely to clog arteries. However, Chowdhury explains, these smaller particles are not increased by saturated fat, but rather by excess intake of sugary foods: “If anything is driving your LDL in a more adverse way, it’s carbohydrates.” Chowdhury therefore believes that high carbohydrate diets should be the focus of dietary guidelines.

The Mediterranean diet
Dr Frank Hu, professor of nutrition and epidemiology at Harvard Medical School, who was not involved in Chowdhury’s study, is also quoted in the New York Times article warning that the new study should not be taken as a “green light” to eat more saturated fat. He believes dietary guidelines should emphasise real whole foods, not individual macronutrients. He said people should try to eat foods that are typical of the Mediterranean diet. I agree with Hu.

Another large study published last year, not included in Chowdhury’s study, reported that a Mediterranean diet supplemented with extra nuts and extra-virgin olive oil reduced heart attack and strokes compared with a low-fat diet with more starches (R Estruch and others, the New England Journal of Medicine (2013). The traditional Mediterranean diet is characterised by a high intake of olive oil, fruit, nuts, vegetables and cereals; moderate intake of fish and poultry; low intake of dairy products, red meat, processed meat and sweets; and wine in moderation, consumed with meals.

When writing about healthy eating, I like to finish with my personal advice, based on years of reading and thinking about the matter. I am convinced that, for the average person who doesn’t suffer from some medically diagnosed ailment, the key to a healthy diet is simple, and the research described in this article supports my belief.

My recipe is eat a wide variety of whole foods in moderation, mostly plants, and take plenty of aerobic exercise. This advice demonises no food and ensures no important nutrients are missed. There is good evidence that we benefit from eating lots of fruit and vegetables, which, together with eating in moderation and exercising, should prevent the onset of obesity.

William Reville is an emeritus professor of biochemistry at UCC.
understandingscience.ucc.ie