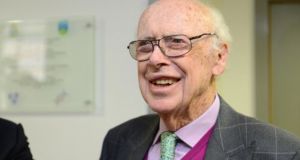 One of the world’s best-known scientists is selling his Nobel Prize medal in a bid to allow him to “re-enter public life” after being shunned for the past seven years following comments linking race and intelligence.

American James Watson, who worked alongside British scientist Francis Crick while at Cambridge University and discovered the double helix structure of DNA, said he had become an “unperson” since his remarks in a newspaper interview in 2007.

He had told the Sunday Times black people were not of equal intelligence to white people.

Since the controversial comments Dr Watson has not given any public lectures and said he had been sacked from the boards of companies, adding “no one really wants to admit I exist”.

He told the Financial Times: “I apologise ...(the journalist) somehow wrote that I worried about the people in Africa because of their low IQ — and you’re not supposed to say that.”

He said it had been “stupid on my part”, and insisted he is not racist “in a conventional way”.

Prof Watson said he would use the money from the sale of the medal, which Christie’s said could be sold for as much as $2.2 million dollars, to buy art, supplement his income and make donations to some of the institutions he is associated with including Clare College, Cambridge.

“I really would love to own a (painting by David) Hockney,” he said.

Auctioneer Francis Wahlgren told the Financial Times he did not expect Prof Watson’s previous remarks to affect the sale.

“There are a lot of personalities in history we’d find fault with — but their discoveries transcend human foibles,” he said.

The medal, awarded in 1962, is expected to be auctioned in New York on Thursday with a reserve price of £1.6 million pounds.