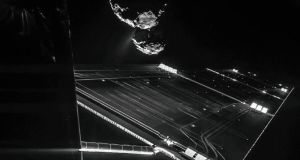 Taken from a camera onboard Rosetta’s Philae lander, about 16km from comet 67P/Churyumov–Gerasimenko. Photograph: EPA 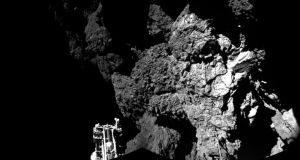 The Philae lander sitting on a comet 500 million kilometres away is streaming back pictures and vast amounts of data despite its rough landing and being wedged against a wall.

Most of its 10 experiments have already done some sampling and its controllers at the European Space Agency benefitted from getting “three landings for the price of one”, said Laurence O’Rourke an Irish scientist directly involved in the Rosetta mission to comet 67P/Churyumov-Gerasimenko.

“At this stage the data we have is already beyond our expectations,” he said this afternoon. “It didn’t land once it landed three times. It is on the surface and it is not moving and we are getting amazing science from it.”

The Rosetta satellite reached the comet last August after a 10 year journey. Once in orbit ESA controllers in Germany began preparations for yesterday’s release of the Philae lander and its 22km freefall down onto the surface.

The landing wasn’t pretty but it worked. Two essential systems meant to fix Philae to the surface - harpoons and a jet pack - failed to work on touchdown at about 3.30pm Irish time.

“The surface is a bit like a trampoline,” he said. For this reason the lander rebounded back up, drifting for two hours before the comet’s weak gravity brought Philae down for a second go. It bounced again, but only for a few minutes before finally stopping, Mr O’Rourke explained.

“It is against a rocky hole, one leg up, two on the ground and its back is against a wall,” he said. “But it is responding and I think we had a lot of luck yesterday. We didn’t fall over we landed on our feet.”

Philae was designed to be autonomous when first landing so even though it bounced the first time all its instruments were ready and began capturing data.. It “sniffed” the dust it kicked up, analysing its contents using mass spectrometers. “We got a good spectrum but then it landed in a different location and the system also sniffed there and we already know the results are different,” he said.

Philae measured how much its feet dug into the surface. “The surface we touched was reasonably soft but hard enough for it not to sink in. We got data from the magnetometer, the cameras are taking pictures and we even used the radar to see what the comet looks like inside.”

One big question is whether Philae sits in the shade of the wall, preventing its solar panels from charging the main battery. It is charging some but not enough, he said.

Controllers were meeting this evening (thurs) to decide whether to chance trying to shift the lander away from the wall using some of its experiments. It does however carry a short-lived primary battery that will allow it to deploy all of the experiments before running out of power.

“It is a lot of fun, but I am suffering from a lack of sleep,” Mr O’Rourke said. “But it is really amazing, I am stuck for words.