Plastic’s journey from the sea to our dinner plates

Over the past decade, scientists have become increasingly aware that our oceans are filling with plastic, but the potential hazards of this proliferation remain unclear 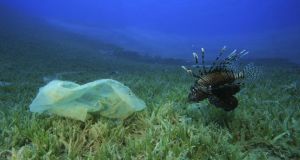 Water pollution: a plastic bag and a lionfish. Photograph: Thinkstock

Scientists recovered tiny plastic fibres in edible mussels taken from the wild and from supermarket shelves in Belgium last summer. The shellfish filtered them from the sea.

Over the past decade, scientists have become increasingly aware that our oceans are filling with plastic. Plastic pellets called nurdles are the raw material for most plastics, and plastics revert to nurdles at sea. And it seems some pieces are ending up on our dinner plates.

Closer to home, commercial fish off the south of England and the west of Ireland have been found to harbour the tiny plastic pieces. Whether they do any harm is unknown. However, the chemical ingredients of more than 50 per cent of plastics are hazardous, and there is concern about toxins.

“Because of the nature of their surface, plastics pick up toxins. This can be all sorts of organic pollutants like antibiotics, pesticides, and also heavy metals,” says Dr Carlos Rocha in Trinity College Dublin. “Filter feeders such as mussels extract particles from the seawater, and it is possible for them to have large accumulations.”

Rocha and Dr Dannielle Green at Trinity College Dublin are investigating how microplastic pollution affects marine creatures. “We are sampling organisms in their natural environment, and also exposing some to concentrations of plastics in tanks, to see what this does to them,” says Rocha. There is evidence that microplastic can harm marine animals, but it is early days.

PhD student Amy Lusher at Galway- Mayo Institute of Technology is asking another critical question: how much microplastic is in Irish waters? She has spent weeks cruising off the Irish coast aboard Marine Institute research vessels, sieving Atlantic seawater.

She recently reported 2.46 particles per cubic metre of water in Marine Pollution Bulletin. Is this harmful? “We don’t really know. We are investigating the effects,” says Lusher, who previously reported microplastics in whiting, horse mackerel, John Dory and sole caught in the English Channel.

Californian Dr Markus Eriksen, co-founder of the 5 Gyres Institute, is leading expeditions into remote ocean areas to study abundance of plastics. The five gyres are giant systems of rotating currents in ocean centres. In 1997, US scientist and sailing enthusiast Charles Moore happened upon the “Great Pacific garbage patch”, and his reports attracted attention. “We worked with him in the Pacific, but then we decided to explore the four other subtropical gyres,” says Eriksen.

“Our first big expedition [in 2010] was the Atlantic, from the Bahamas to the Azores, and we found plastic in every trawl. The north Atlantic was just as contaminated as the north Pacific,” says Eriksen. On a recent expedition he picked up plastics from seeming pristine waters off Greenland. “The gyres are like gigantic plastic crushers, turning big plastics into small plastics, then distributing them worldwide,” he says. A recent report estimated 5.25 trillion plastic particles, weighing about 269,000 tons, are in the world’s oceans.

What does this look like? “When you are sailing you don’t see a bunch of trash in one spot. When you drag a 60cm wide net for two or three miles, which takes a few hours, you get a handful of plastic confetti, the size of a grain of rice or smaller. Those are most abundant,” says Eriksen. The potential for ocean creatures to concentrate plastic in their bodies is of concern.

Plastic from our homes

Ocean plastic can come from coastal activities, shipping or landfill waste leaching out into waterways, but also from our homes.

“When you wash clothes made of polyester or nylon, they break down, and synthetic fibres get into the sewage system,” says Lusher. These are not removed, and so there is a constant flow into the environment. Tiny plastic beads in some cosmetic scrubs are another source, going from shower to plughole to our seas.

What we do know is that the problem is increasing, with more being added each year. Experts disagree about harm, however. Prof Richard Thompson at Plymouth University recently found that small amounts of plastics could reduce the ability of common marine worms to store energy, potentially compromising their growth and their nutritional value to predators.

At the same time, he offers reassurance. “I don’t think there is any cause for concern of humans ingesting microplastics. The quantities in fish and shellfish are relatively low, but we do need to understand more about potential hazards.” Thompson, who wrote a seminal scientific study of microplastics in Science in 2004, is collaborating with Rocha and Green.

Eriksen’s view is more worrying. “We find plastics everywhere on the planet. Microplastics cross the gut barrier and get into the bloodstream of clams and snails,” he says. “Whatever is on those plastics can leach into their bodies and accumulate in the food chain and eventually on to your dinner plate.”

“You could almost say kids born today are a chemistry experiment of the chemical inventions of the last century.”

OCEAN CLEANUP: A HELP BUT NOT THE SOLUTION

Plastics are a critical smart material used in all sorts of technologies. They can save on weight and improve the fuel efficiency of aircraft, trains and automobiles. But can we stop them polluting our oceans?

Dutch environmentalist Boyan Slat founded the project Ocean Cleanup after he encountered more plastic bags than fish while diving in Greece when he was 16. The project is seeking donations online and aims to set up a system of floating barriers to collect plastics in ocean gyres.

Prof Richard Thompson in Plymouth says such efforts are laudable but the answer lies on land. “Plastics are not the enemy; it’s what we do with them that creates the problem. The solution is to stop plastics getting into the ocean in the first place,” he says. “There is a lot more industry can do, like designing plastic products so that they can be readily recaptured in the recycling stream.”

A massive 30 per cent of plastics are for single-use items, some of which are not designed with recycling in mind.

“It concerns me that industry and policymakers and the general public might think this problem could be solved through clean-up. We are not going to be able to remove plastic debris as fast as it is going in to the ocean.”