Scientists explore deep sea landscape off the west of Ireland 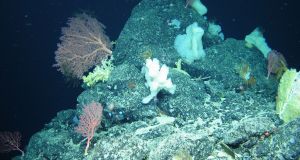 A sponge garden at nearly 2,000 metres below sea level. 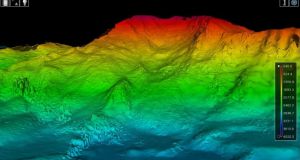 3D mapping of the ocean landscape.

A deep sea mountain landscape marked by “catastrophic” rock avalanches and giant boulder fields has been mapped by an international team of scientists on the State’s research ship RV Celtic Explorer.

Film footage of “sponge gardens” and a skate “nursery” with fish eggs laid at almost 2,000m has also been recorded by the team in an area of the Mid-Atlantic Ridge, west of Ireland.

First investigated in 1966 and named after the US Coast Guard weather station Charlie, the tectonic spreading comprises two parallel fracture zones or “interruptions” of the mid-Atlantic ridge which is estimated to have grown over a 90 million year period.

The ridge extends from the Azores and Iceland, with more than 2,000 km of it traced from south-west Ireland, close to the Porcupine Bank canyon, to the north-east of Newfoundland.

“Up to 150 rock and sediment samples amounting to roughly 200kg along with 86 hours of video footage and more than 10,000 sq/km of the zone were also mapped, which is almost the size of Co Galway and Co Mayo together,” Dr Georgiopoulou said.

She described the sponge gardens as “spectacular”, and said that the discovery of more than 70 skate eggs was a “first for the deep sea”.

Exploring three mountain areas, 500-1000m high scarps were discovered that have been produced by catastrophic rock avalanches, with giant boulder fields spilling into the fractures,” she said.

“Although these fracture zones are similar to the San Andreas fault in the western US and the North Anatolian fault in Turkey and Greece, with large earthquakes taking place there regularly, this is the first time there has been a dedicated geological study in the Charlie-Gibbs fracture zone area,”she added.

The Marine Institute said the area was first mapped in 2015 on the RV Celtic Explorer as part of the State’s seabed mapping project, Infomar – and as one of the key projects initiated by the Atlantic Ocean Research Alliance involving Canada, the EU and the US.

“The high resolution data produced … in 2015 revealed spectacular landscape with 4,000m high mounds rising from the seabed to 600m below the sea surface, taller than Carrauntoohil, Ireland’s highest mountain, and this has been instrumental in our continued research over the last month,” Dr Georgiopoulou said.

“What we have found at the Charlie-Gibbs Fracture Zone surpassed all of our expectations,”she said.

Marine Institute chief executive Dr Peter Heffernan congratulated the team, and said deep ocean expeditions “cannot be taken for granted as we need to better understand the features that make up the ocean seabed”.

“With the ocean affecting climate change, global population and seafood demand, we need to map our seabed to define favorable habitats for fishing, key sites for conservation, and safe navigation for shipping,”he said.

The expedition was co-ordinated by the Marine Institute, with funding from the National Development Plan and the German Science Foundation. The institute says the mapping dataset will be available to the open source Atlantic Ocean Research Alliance “after a moratorium period of a year”.