Bee part of the solution to the pollination problem 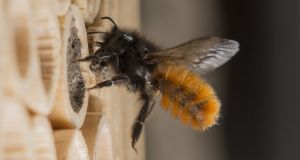 Impact Journalism Day 2018 (June 16th, 2018) is dedicated to solutions-based journalism, sharing stories of positivity and innovation. As a member of the Sparknews alliance of 50 international media outlets, ‘The Irish Times’ today brings you stories of solutions to global and local issues. For more information see impactjournalismday.com.

Having wild bees as pets might sound a little off the wall, but such is the case for Tom Strobi and Claudio Sedivy. The two biologists from Zurich are working with an environmental issue at heart: boosting the populations of these endangered pollinators.

In 2011, a United Nations report set alarm bells ringing. It said that the worldwide bee population is in freefall. According to the UN, the phenomenon is due to a reduction in flowering plants, as well as the presence of pesticides and air pollution.

And the stakes are high. Without bees acting as pollinators, one-third of our food supply could disappear. Of the 100 plant species accounting for 90 percent of the world’s food, more than 70 percent rely on bees for pollination.

A growing number of documentaries and articles about the issue indicate that the countdown has truly begun.

But is the demise of these insects unavoidable? Could we take individual action and work toward a reversal of the trend? Banning pesticides worldwide is beyond any one person’s control.

However, the Zurich startup Wildbiene + Partner, founded in 2013 by Strobl and Sedivy, offers each one of us the possibility to make a simple gesture for the survival of the bees. By setting up a mason bee nest on a balcony or in a garden, any person can become a breeder and provide bees with a place to reproduce.

Unlike honey bees, mason bees have no queen, do not sting and do not produce honey. These furry little amber-coloured insects prove rather agreeable company in an urban garden or on a balcony, where they can enjoy a diversity of plants. They are hard-working pollinators.

“One single wild bee pollinates as much as 300 honey bees,” Strobl said.

But not all flowers have quite the same draw for mason bees. They particularly enjoy fruit trees and plants such as strawberries, raspberries and blackberries.

Five years after the launch of the startup, the concept has already won over some 30,000 clients and 300 farmers in Switzerland. And the number of takers is firmly on the rise. Starting this year, the offer was extended to France. All one needs to do to become a breeder is order the equipment from the startup’s website, then wait for delivery of a bee home and a population of 25 bee cocoons.

The Swiss-German startup sells two different bee home options, one for private clients and the other for professionals. The first is a small home, around 20 cm wide, with roughly 100 nesting holes. It costs 120 Swiss francs (US$120 or €102).

The second is a similar structure but eight times the size, and it sells for 200 francs. Strobl and Sedivy recommend that breeders have as many different homes as possible to optimise pollination.

“Depending on the nature of their crops, we advise people to install two to four nests, or homes, per hectare,” Strobl said.

To increase the population of wild bees in Switzerland, and fight their extinction, Wildbiene + Partner suggest that bee home owners pay a small fee to send the inside structure of their bee homes back every autumn and the nesting tubes each hold six to 12 cocoons. The eggs, collected by the biologists, are then used to make new stocks and replenish the bee homes. They claim each bee home can lead to the birth of more than 100 bees per year.

In exchange, the biologists check the returned bee homes for parasites.

“As this is not their natural habitat, the risks of infestation are higher,” explained Strobl. They keep statistics for every bee home, giving breeders a way to know exactly how many bees they’ve brought into the world since setting up their operation.

Aside from boosting pollination, the two Zurich biologists are trying to raise people’s awareness of how bees live. For a slightly higher fee, individuals can order a bee home equipped with an observation drawer.

Any curious breeder can then study the insect along its evolutionary cycle from egg to cocoon. Although mason bees zoom in and out of their homes between March and June, from July onward the majority of their activity takes place inside the structure.