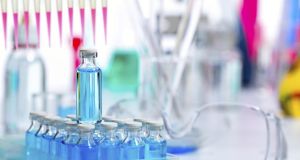 A majority of projects involving animals were in the category of pre-clinical testing of medicines for potency and pollutants. Photograph: Getty Images

Almost 225,000 animals were used in scientific procedures in Ireland last year, according to new figures.

Cats and dogs were used more than 1,200 times for scientific experiments in 2014. However, the report notes that these species were only exposed to veterinary-related procedures as opposed to tests on products intended for human use.

Almost 90,000 of just over 200,000 mice experimented on last year took part in tests which were so severe that they could not be used for scientific purposes again. This was also the case for 1,104 rats and 36 rabbits.

Some 60 cattle were used for human cancer research alongside hundreds of mice. A majority of projects involving animals were in the “regulatory and routine production” category, which encompasses pre-clinical testing of medicines for potency and pollutants.

“Although complete replacement of animal studies is the ultimate goal of the directive, this is not currently possible,” read a section of the report.

“Where biological processes are not sufficiently understood or are very complex, non-animal research or test methods are often not available. Animal studies are often necessary to fill knowledge gaps in order to safeguard human, animal and environmental health.”

However, John Carmody, spokesman for the Animal Rights Action Network, said it was “disgusted and sickened” by the latest figures concerning the use of animals in experiments.

“We feel it leads research down a dark alley for the most part and delays true medical progress. We also believe that compassionate Irish households are going to be disturbed when they learn that man’s best friend is sadly used as a research tool,” he added.