Neanderthals and humans ‘co-existed for up to 5,400 years’

‘Nature’ study examines decline of one population and rise of an other 40,000 years ago 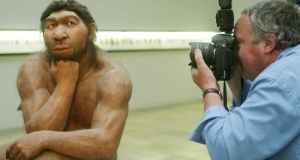 A photographer taking pictures of a reconstruction of a Neanderthal man ancestor displayed at the Prehistoric Museum in Halle, Germany. Photograph: Sebastian Willnow/AFP/Getty Images.

Scientists believe they can pinpoint with greater accuracy when the Neanderthals disappeared from Europe to be replaced by modern humans.

The studies show there was a long overlap during which the two competing populations could have shared the latest technology, stone and flint tools, and may also have interbred.

The large international study involved the dating of material excavated from 40 archaeological Neanderthal sites that ranged from Spain right across to European Russia. Their best estimate is that the Neanderthals disappeared about 40,000 years ago.

They also found, however, that it wasn’t like closing the door, there was a long gradual decline across several millenniums when the exchanges between the two human species took place.

“Our data indicate that the disappearance of Neanderthals occurred at different times in different regions,” the authors say in a letter published today in the journal Nature.

This would have provided time for the two species to cosy up if so inclined, or learn to hate one another, possibly resulting in the disappearance of the Neanderthals.

Scientists have long speculated - and argued - about this sudden demise and when it happened. The long term assumption is that the modern humans with better brains and better technology spread at will across Neanderthal territory in southern Europe. The thinking is they simply cleared the Neanderthals out as unwanted competitors for resources.

The authors believe their data undermines these assumptions. There was “ample time for the transmission of cultural and symbolic behaviours as well as possible genetic exchanges between the two groups”, they argue.

This could explain why it is difficult to identify which species was responsible for sites where stone and flint tools were made. Modern humans may have shown their hominid cousins how to make the tools or perhaps the Neanderthals were able to copy them.

There is no doubt whatsoever about a genetic overlap however. There is proven interbreeding between the Neanderthals and the modern humans on the basis of genetic studies. “This resulted in an introgression of 1.5 to 2.1 per cent of Neanderthal-derived DNA, or perhaps more in all modern non-African human populations,” the authors write.

What remains unclear is whether this genetic exchange was cordial and consensual or forcefully achieved. Questions also remain about whether there was one or several interbreeding episodes, the authors write.

The new confidence about the timing comes from the use of new radiocarbon dating technology based on accelerator-mass-spectrometry. This allowed the authors to push back the 50,000 year measuring limit that applied with earlier radiocarbon systems.

There view is Neanderthal decline took place between 41,000 and 39,000 years ago. But there was plenty of time for them to interact with the incoming modern humans, possibly to the Neanderthals long term detriment.

The full paper can be viewed here