The meat eater was fluffy but ferocious, study shows 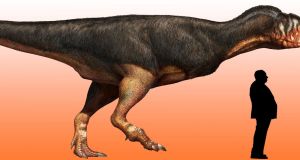 An artist’s impression of what the Abelisaur looked like and how it moved, as revealed by an analysis of its femur, its largest leg bone. Illustration: Davide Bonad

A fossil lying forgotten in a museum drawer has revealed new information about a ferocious meat eater that lived 95 million years ago.

It had a deadly bite but also probably sported a covering of fluffy feathers, the scientists who came across the fossil believe.

There was no tag describing the bone held at the Museum of Geology and Palaeontology in Palermo, Italy.

But PhD student Alessandro Chiarenza from Imperial College London who found it knew it was a femur, the big leg bone.

He got permission from the museum to study the bone and joined with colleague Andrea Cau from the University of Bologna to identify what dinosaur it came from.

They quickly discovered it was from an abelisaur, an unusually built predatory carnivore that had tiny forelimbs but it also had plenty of razor-sharp teeth and powerful hind limbs.

The bone allowed them to estimate the beast was nine metres long and weighed in at one to two tonnes, much bigger than any abelisaur yet discovered, the researchers said.

“Their appearance may have looked a bit odd as they were probably covered in feathers with tiny, useless forelimbs, but make no mistake they were fearsome killers in their time,” he said.

This animal lived in what is now Morocco and experienced a much different climate than exists today.

This would have been tropical and lush country with rivers and mangrove swamps offering a menu of turtles, crocodiles, large fish and of course other dinosaurs, the researchers write in the American Journal of Peer J.

Having a femur to study was particularly useful as its size and the connection points for ligaments and muscles reveal the animal’s overall appearance and how it might have walked.

The project also showed how important museums can be in terms of scientific advance.

“As Stephen Gould, an influential palaeontologist and evolutinary biologist once said, sometimes the greatest discoveries are made in museum drawers,” said co-author Andrea Cau .