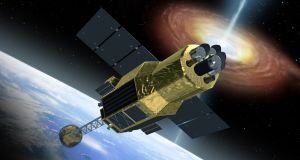 The Astro-H satellite after a perfect launch from Japan’s Tanegashima Space Centre. Contact has been lost with the satellite.

A satellite mission that had significant involvement from researchers in Dublin has failed after its solar panels broke, cutting off its electricity supply.

The Japanese Aerospace Exploration Agency (Jaxa) said on Thursday that there was now no chance of establishing contact with the Astro-H satellite.

The satellite was launched on February 17th and contact with the spacecraft was lost on March 26th.

Since then Jaxa has made repeated attempts to understand what had gone wrong.

The most likely cause of the failure was when the satellite started spinning rapidly for unknown reasons, which may have caused the solar panels to shear off at their base, the agency said.

Jaxa extended “sincere apologies” to all who had supported the satellite and its launch, including the US National Aeronautics and Space Administration (Nasa) “and to all foreign and Japanese astrophysicists” involved in the launch.

The Dublin Institute for Advanced Studies was one body affected by the satellite’s failure.

It was involved through Prof Felix Aharonian of the school of cosmic physics, who was a member of the European Space Agency team assigned to the project for the last several years.

“It is a reminder to us all that space experiments are never entirely risk-free,” said Prof Luke Drury, director of the school.

“We share in the sadness of our Japanese colleagues, but science goes on and the international community will build new and better satellites learning from the experience of [Astro-H] .”

The satellite was an X-ray telescope designed to see X-rays rather than visible light.

There are many high-energy X-ray sources in our galaxy and Astro-H would have been able to collect and return a vast amount of data on these sources.

Jaxa said it would now focus on investigating what had gone wrong with the satellite.