If not for WB Yeats, Ireland might have been an island of saints and scientists

Perhaps if science hadn’t been knocked aside by the Celtic Revival, we might have had a more science-focused start to the new state 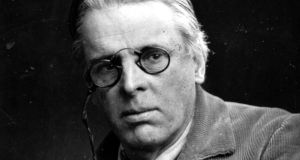 ‘Quite why Yeats thought poetry and physics were mutually exclusive I do not know.’ Photograph: Getty Images

Why is it that in Ireland we celebrate our famous writers but not our great scientists, inventors and engineers? As we gear up to mark St Patrick’s Day, and prepare for the centenaries of 1916 and the founding of the State, isn’t it time we took a fresh look at who we think we are?

We are rightly famous for our writers, artists and athletes. We are noted, too, for our rich musical tradition, and for Riverdance and our books, booze and boxing.

But we don’t just invent stories; we are also good at inventing gadgets, and engineering solutions and equations. We are good at discovering eternal truths as well as writing about them. It’s just that this creative scientific heritage is less well-known and mostly invisible.

Many of the world’s great scientists were from Ireland, especially in the 19th century. William Thomson (aka Kelvin) was a founder of thermodynamics. John Tyndall was a great experimentalist, the first to realise that there could be a greenhouse gas effect. George Gabriel Stokes was brilliant in so many varied fields that it’s hard to single out one of his achievements. Nicholas Callan invented the induction coil and built the world’s biggest battery and largest electric magnet. George Francis FitzGerald laid the foundations for relativity.

Irish people also built the world’s biggest telescope, invented the hypodermic syringe and the steam turbine and even the electron, and laid the foundations of molecular biology, and more.

Above all is Sir William Rowan Hamilton, whose brilliant work paved the way for quantum mechanics and later helped to land a man on the moon, and who hoped that his successes would bring fame to Ireland and make us proud.

With the coming of the literary revival, however, this rich and important heritage was deliberately left behind.

As WB Yeats saw it in 1889, Ireland had a choice of “two cultures”: “There are two boats going to sea. In which shall we sail? There is the little boat of science. Every century a new little boat of science starts and is shipwrecked; and yet again another puts forth, gaily laughing at its predecessors. Then there is the great galleon of tradition, and on board it travel the great poets and dreamers of the past.”

Quite why Yeats thought poetry and physics were mutually exclusive I do not know, nor why the little boat captained by science should be the one that was always shipwrecked, and not the great galleon steered by dreamers. It’s all the more surprising because, as a schoolboy, WB was interested in science; he was good at maths and keen on evolution and entomology.

Perhaps it was because Yeats’s desire for mysticism was so strong that it could not accommodate the materialism of science? Or, as some have argued, perhaps he was conscious of the demands of the diaspora, the global audience that had its own ideas about Irishness? Whatever the reason, the result was that science was sidelined.

With partition, Ireland’s two-culture divide was hardwired into the island. When VS Pritchett visited Belfast in 1923, he discovered that Dublin was a town of poets, but that in industrial Belfast “poetry don’t drive many rivets”.

A century later, does this matter?

Psychologists say that the stories we tell ourselves have a profound impact on our sense of identity, on our relationships, and on our choices.

Perhaps if Yeats and his buddies had embraced science more during the Celtic Revival and taken the brave new boat of science as well as the galleon of tradition, we might have had a more technological start to the new State in 1922, more science in our schools and curriculums. More industry and innovation.

Dublin might now also have a science centre, to sit alongside the Writers’ Centre, Writers’ Museum and Unesco City of Literature status, not to mention the proposed literary visitor centre.

But this isn’t just about more visitor attractions for the tourist dollar; it’s also about our history and heritage, our sense of identity, and the options we might envisage for the future of the country at the start of our second century, including relations with Belfast and the Northern riveters.

Now that we take our place with pride on the world stage, surely we have the confidence to admit to a richer sense of self, and rewrite our national story just a little?

Mary Mulvihill is a science writer. She tweets about Irish science heritage at @IngeniousIE