Have your say about science 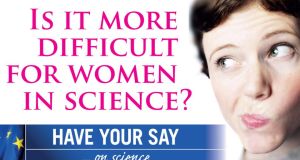 Why do more men than women pursue careers in the sciences? Do fewer women have an interest in science or are they being excluded?

Gender imbalance in the sciences at student and career level is explored in the current Have Your Say About Science question, posed by Atomium Culture. It is seeking the public’s view on this and other questions related to science so that your contributions can be taken into account when the next EU science budget, Horizon2020, is finalised.

Atomium Culture is a body set up to help the general public engage with EU-funded scientific activity going on in laboratories across Europe. It provides descriptions of this research written for the lay reader and releases them through media partners including The Irish Times .

The current Have Your Say About Science initiative is a pilot study to gauge the willingness of people to make their views known on a range of subjects. It involves logging on and completing an opinion poll on the question at issue, with this week’s being: Is it more difficult for women in science?

This then opens an associated comment line where you may put your views and also debate the issues with others. Atomium Culture’s goal is to put together the public’s concerns and then make them known to the Commission. These can then be taken into consideration before the science budget is decided.

The women in science question is the second in a series of at least five questions to be raised during this special initiative. The next, on scientific ethics, will be put later this week.

To join the debate and have your say about science then click on this link. You may also go to atomiumculture.eu where you can enter your views on the first question which related to science education with the simple query: What do you think about science and maths?