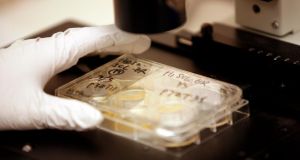 There is real value in participating as an “expert” for the European Commission. For emerging researchers, it gives direct experience of the peer review process, offering them a greater understanding of how proposals are funded, and helps them when preparing their own proposals. Photograph: Darren Hauck/ Getty Images.

At this time of year the flights from Dublin to Brussels hold many researchers and academics on their way to participate in evaluation panels for Framework Seven funding proposals. Over the years, the European Commission has developed a trusted, fair, open and transparent peer review process that ensures proposals get properly assessed. These will be among the last evaluations in Framework Seven, as this funding programme is almost finished.

There is real value in participating as an “expert” for the European Commission. For emerging researchers, it gives direct experience of the peer review process, offering them a greater understanding of how proposals are funded, and helps them when preparing their own proposals.

The process is carried out through English, giving Irish researchers a distinct advantage, and command of English can often lead to being asked to co-ordinate reviews and chair peer review panels.

It can often act as a catalyst for collaboration and this aspect of the Framework programmes cannot be overemphasized. In a recent Nature article, Jonathan Adams analyses 25 million papers published between 1981 and 2012. He focuses on the changing ratio over time of domestic versus internationally collaborative publications. For example, in western Europe in 1981, five out of six papers were purely domestic; by 2011, half had foreign collaborators.

A close study of the UK and US showed international collaboration had a positive impact on quality of research as measured by the number of citations.

The 1990s was a period of burgeoning international collaboration for Ireland, with more and more researchers participating in successive EU Framework programmes. Analysis by the Irish Universities Association of publications with the Thomson Reuters InCites tool showed this was also a period when research quality improved significantly.

Collaboration doubled
This international collaboration continued from 2000, with the major national investments in research through the HEA Programme for Research in Third Level Institutions (PRTLI) and Science Foundation Ireland. For example, between 2000-2004 and 2008-2012 collaborative publications between Irish researchers and those in countries including the UK, US, France, Germany and Italy doubled.

The discussions on Horizon 2020, the next big R&D funding programme, are at an advanced stage. The so-called trialogue discussions are taking place between the European Commission, EU member states and the European Parliament.

The total budget looks to be about €70 billion, as opposed to the €55 billion for Framework Seven. However, Horizon 2020 will include the Competitiveness and Innovation Programme and Erasmus Mundus that are run separately from Framework Seven. In addition, it will fund the European Institute for Innovation and Technology.

The Horizon 2020 programme has evolved from the earlier narrowly focused industry-led Framework programmes closed to non-Europeans. It will fund frontier research and address major challenges to European countries in the areas of health, energy and the environment, for example.

The programme is based on the three pillars of scientific excellence, industrial leadership and societal challenges. The European Research Council, Marie Sklodowska-Curie Actions, Future and Emerging Technologies and Research Infrastructures constitute the scientific excellence pillar. It is the first time in the history of EU R&D funding that scientific excellence has been so explicitly supported, being given about 30 per cent of the total budget.

Given the delays there have been in the negotiations, many of the first calls for proposals will be in early 2014. This has been a feature of successive Framework programmes. That being said, it is not too early to begin preparations for Horizon 2020. There will be differences but there will also be a great deal of continuity. For example, the European Research Council and the Marie Sklodowska-Curie Actions will look very similar in the new programme.

Horizon 2020 offers two major opportunities: funding and collaboration. Many may view the programme as simply an opportunity to access funding not available from national programmes. But the real value is the opportunity to affords to collaborate with researchers in 41 countries. It is clear that participation in Horizon 2020 will raise the level of research in Ireland.

1 Donegal to move to Level 3 Covid-19 restrictions, Taoiseach confirms
2 Covid-19: Three more deaths and 324 new cases in State as ‘green list’ of countries reduced
3 Next 10 days critical in fight against Covid-19 in Cork, says advisor
4 Coveney to visit US next week amid heightened concerns over Brexit
5 People leaving Catholic church because they are tired of ‘little old men’ - McAleese
Real news has value SUBSCRIBE