Final descent: Rosetta set to crash-land on its comet

On September 30th, the Rosetta satellite will reach the end of its 12-year mission and join the Philae lander on an icy grave 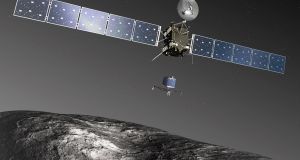 The Rosetta satellite and Philae lander 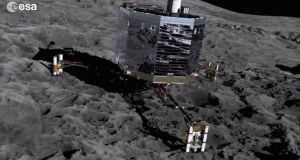 The Philae lander on comet 67P/Churyomov-Gerasimenko

The lights are about to be switched off on one of the most successful satellite missions of all time. On September 29th or 30th the Rosetta satellite will fire its thrusters and begin a slow 20km descent for a planned crash landing on the comet it has been orbiting for the past two years.

For many at the European Space Agency, and more so the staff who have worked directly with Rosetta, it will be a sad moment.

“It has been part of my life for eight years. It will be a bittersweet moment when it comes down,” says Irishman Laurence O’Rourke, Rosetta science operations manager.

“It has been flying around the comet for two years and it has delivered a treasure trove of planetary science in the data it collected. It will be used by generations of scientists,” he says.

Nothing as complex as this had ever been done before, says O’Rourke. The satellite had to chase the comet, travelling 6.4 billion kilometres in the process.

So long was the journey that controllers put the satellite pair into hibernation for 31 months to conserve its delicate systems.

They arrived at the comet in August 2014 and Philae was sent to the surface in November that year. Rosetta has been streaming a wealth of data back to Earth from the moment it arrived. While Philae did not perform as hoped because it didn’t latch onto the surface, it still sent back lots of data about the comet’s surface and sampled the dust and gases around the comet.

The fact that Rosetta could get “up close and personal” with the comet made it so special, says O’Rourke. “In the case of comets, other missions have performed very fast flybys of their surface, giving a very limited glimpse to these objects.”

Rosetta was the first to orbit a comet and to place a lander on the surface in a controlled descent.

Scientists are keenly interested in comets, sometimes described as “dirty snowballs” or “icy dirtballs” given their makeup, a mix of dust, ice and a wide collection of chemicals. They are hugely important, however, because they represent the “leftovers” from the formation of our solar system. The planets gradually accumulated the dust and other material in orbit around the sun, eventually aggregating into the planets as we know them.

That all sounds simple, but it is anything but. “They have trapped inside them after over 4.5 billion years the gases and dust that existed during the formation of the solar system,” says O’Rourke.

Only by studying pristine remnants of this material can you begin to gain a proper understanding of this process.

The amount learned is colossal. Rosetta used radar to look inside the comet to understand its structure. It found a huge range of gases trapped inside that jetted out as the comet warmed when approaching the sun.

The mission also provided important new information about how the earth got its water – and it wasn’t from comets, or at least a comet like 67P, says Kevin Nolan, physics lecturer at Institute of Technology Tallaght and the Irish representative of the international Planetary Society.

An analysis of the hydrogen from cometary water showed there was a major difference with water on earth. “It adds weight to the argument that water may have come from asteroids instead of comets, or perhaps was indigenous to Earth,” he says.

The comet is 85 per cent porous; that suggests they formed in a gentle way, with material slowly coalescing over time. “It reveals much about the conditions and dynamics of the sun’s protoplanetary disk and the processes giving rise to larger celestial bodies,” Nolan adds.

After September 30th, Rosetta will be gone but definitely not forgotten. There are billions of bytes of data in pictures, radar data, gas and surface analysis and structure to be pored over and analysed.

And from the study of this data will come a far deeper understanding of how our solar system arose and the infant systems we can see still “under construction” around distant stars.

Collecting data until the last minute

The Rosetta satellite has given tremendous service during its two years in orbit around a comet, but it will soon come to a rough end.

Rosetta will follow its lander Philae down for a crash landing on the comet, says Irish scientist Laurence O’Rourke, Rosetta operations manager.

There is little option for the satellite, he says. “Rosetta has started reaching its end of life. It has been in space for 12 years and its solar cells are giving decreased power.”

When Rosetta was on the way to comet 67P/Churyumov- Gerasimenko its operators were able to drop it into a 31-month sleep. But now the orbiter is getting so far away it is unlikely its heaters would be able to keep it warm enough to survive.

Its end will be dramatic, however, says O’Rourke. Late on September 29th or early on the 30th Rosetta will fire its thrusters to begin a final descent.

It will be a slow and careful 20km approach that will take 10 hours to cover. All the while it will continue to take close-up pictures, “sniff” the chemical content of the dust around the comet and take other readings.

The goal as ever is to record the greatest amount of data possible for later study.

Its landing site is called Ma’At, a place where the surface is hard but the underlying material is soft.

“It is a controlled collision, we know where it will land and it will hit at 90cm per second,” says O’Rourke.

“We wouldn’t expect it to bounce, it will slide. Its solar panels will break off along with its communications dish.”

Rosetta will then go silent as it is carried away into the vastness of space.

It is all too evident in everyday life: a broken egg cannot be put together again