Designing postcards for aliens: Wish you were here 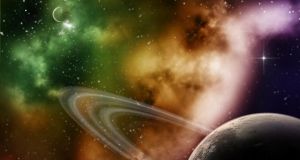 Choosing a message will be tough, say the scientists. Photograph: Getty Images

UK scientists announced their intention to design a message to send to outer space as part of the Breakthrough Message Initiative, a public competition with a $1 million prize fund.

“We’re possibly already spamming the universe with cat videos and Keeping up with the Kardashians because we don’t know the limits of TV and radio transmission, so it makes sense to design a more considered message. What’s intriguing is whether we can decide on what’s important to us as a species and how to communicate that,” explained Dr Anders Sandberg of Oxford University.

Scientists and philosophers involved in the search for extra-terrestrial life were split between those who believe we should make attempts to contact aliens and those who believe it would be like “shouting in a forest full of tigers” when voting on the issue on the closing day of the British Science Festival, he said.

However, the UK Research Network for the Search for Extra-terrestrial Intelligence has decided to proceed with plans to design a message.

“It would take at least 10 years to reach some stars or, if we go further, we could be waiting 200 years for a response. That’s a pretty slow email conversation,” he said. “We’ve moved away from the old ideas of extra-terrestrial life meaning planets and aliens so we need a message that could work for lifeforms potentially drastically different to anything we’ve considered,” he said.

“Statistically Earth is a latecomer to the universe so other species have had several billions of years in which to develop ahead of us, all they need is to be a million years ahead and that’s still pretty advanced.

“Also if they could receive and respond to our message it seems that they would be more advanced than us. So we need to consider the implications of meeting either a more or a less developed species as every time a more advanced civilisation has met a less advanced one in our history, it hasn’t ended well,” said Dr Sandberg.

“It’s an open competition to design a message because this needs to be a process that everyone is involved in, not just one government or one organisation. So there’s every possibility we could be beaten in the competition by a schoolgirl and more power to her if so.”