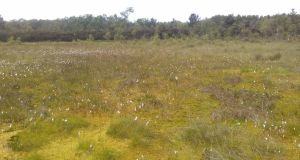 Embryonic Sphagnum-dominated vegetation developing on a Bord na Móna cutaway bog. Sphagnum-rich vegetation like this is a carbon sink for carbon dioxide and has potential to become more effective at absorbing this greenhouse gas from the atmosphere as it develops over time. Photograph courtesy of Bord na Móna. 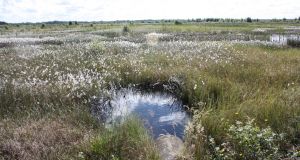 Pioneer poor fen dominated by bog cotton on a Bord na Móna cutaway bog. This type of bog will not become a carbon sink, but will emit significantly less carbon dioxide than a post-production drained bog. Photograph courtesy of Bord na Móna.

“We used to be the pimple on the elephant,” says Mark McCorry, lead on the Bord na Móna (BnaM) ecology team. “Now we are the elephant. This is a massive opportunity.”

He is talking about the decision by Minister for Environment and Climate Eamon Ryan (see interview), and by BnaM itself, to invest €108 million and €18 million, respectively, to “rehabilitate” 33,000 hectares of degraded bogs for climate and biodiversity benefits.

BnaM’s attention to environmental issues has indeed shifted from marginal to mainstream since it first hired an ecologist, Catherine Farrell, in 2001. Some innovative, even exemplary, bog restoration projects followed. But the semi-state juggernaut still mostly did what it has always done, remarkably effectively: mining peat for energy production, domestic fuel and horticulture.

So the new scheme does represent a radical paradigm shift. This hasn’t happened easily.

Critics have long pointed out that BnaM’s core activities contribute significantly to the climate and biodiversity crisis. Intact bogs, in forming new peat layers, not only store carbon, they sequester CO2 from the atmosphere. But peat extraction has the reverse effect: the bog emits CO2 when drained, dried and stripped; meanwhile, extraction vehicles burn other fossil fuels, and peat-fired power stations and domestic briquette-burning also pump out carbon.

That’s a triple whammy on climate; moreover, the distinctive, rich and often threatened plant and animal communities on peatlands are wiped out by extraction.

Rewetting bogs through drain-blocking reduces CO2 emissions initially and can, over time, sequester it, as well as assisting biodiversity recovery.

Until recently, BnaM’s response to demands to cease mining and rewet bogs on a broad scale was similar to St Augustine’s on chastity: yes, but not yet. It wanted to continue extracting until 2027. Protracted court actions by Friends of the Irish Environment and An Taisce, revealing gaping holes in peat extraction licensing and planning regulations, appear to have finally put a stop to that gallop. But questions remain about applications to mine for horticultural peat. Environmental lawyer Andrew Jackson of UCD has undertaken a useful, if partisan, analysis of this history.

If extraction really has ended, what exactly will the “elephant” do now? The terms “rehabilitation” and “restoration” are often used loosely and interchangeably by policy-makers. Worse, they are used duplicitously by industries intent on greenwashing.

However, the BnaM ecology team has always set high standards. They use the internationally accepted scientific definition for restoration: “the process of assisting the recovery of an ecosystem [including all or most of its biological communities and ecological processes] that has been degraded, damaged or destroyed”.

This gold standard is particularly hard to achieve on our raised bogs; their very complex hydrology is wrecked by mining. The litmus test here is whether restoration measures can recover enough of that hydrology to support the sphagnum moss communities that generate peat. McCorry says the team has already restored 3,000 hectares of bog to this level.

But there are different uses of “rehabilitation” within BnaM. For senior management, it often meant ‘decommisioning’ bogs to meet the distinctly vague end-use obligations under its EPA licences: simply clearing industrial detritus from the bog, plus some very basic drain-blocking to prevent erosion and siltation. Rather bafflingly, these licences set neither biodiversity nor climate criteria. Legitimate fears remain that the company’s main legacy may still be biologically and visually impoverished landscapes, spewing carbon.

So will some of the new funding will be diverted to cover decommissioning responsibilities the company should fund out of existing reserves? The company, and Ryan, say this concern is baseless.

And in fairness, the ecology team has always used “rehabilitation” in reference to much more ambitious procedures. It describes projects where rewetting had not restored peat-forming ecosystems, but had nonetheless resulted in wetlands (like Ballycon bog), with a mosaic of valuable habitats, from deep water through to relatively dry areas. Even the latter sometimes proved to be significant habitat for rare species, such as blue fleabane. And while such rehabilitation will not sequester CO2, it can reduce emissions significantly.

McCorry says he will do full restoration where he can under the new scheme, but also has an ambitious vision for “enhanced rehabilitation”:

“We will not just block drains, but use bunding [creating embankments to retain water], and reprofiling topography to maximise groundwater levels. If we can get the hydrology right, the ecological and climate benefits will follow. We will also experiment with inoculation [revegetation] of sphagnum.”

He is emphatic that they will “ramp up monitoring and verification”, feeding data into research projects. This should enable much more accurate calculations of emissions – and sequestration – not just of terrestrial but of fluvial carbon, and of methane. “We don’t always have a good understanding of emission factors at present, but this data will enable us to learn more,” he says.

McCorry accepts there will be difficult trade-offs where BnaM windfarms and rehabilitation areas overlap, but believes – though not everyone agrees – that these elements, which both mitigate climate change, can be harmonised.

He looks forward to working with the 310 colleagues who will retain their jobs as part of the Just Transition strategy adopted by the Government, reversing their roles from peat extractors to peatland restorationists.

McCorry stresses that on every site they rehabilitate or restore, there will be prior engagement, not only with owners of adjacent land which may be impacted, but with the wider local communities, highlighting new amenity and other opportunities.

He argues there will be multiple national benefits: climate and flood mitigation, biodiversity recovery, rural employment, improved water and air quality, tourism, landscape quality and recreation, all of which should be captured, he says, in a natural capital accounting system.

Given the company’s chequered environmental history, independent bog experts give the new scheme a broad welcome, but remain sceptical.

Both Florence Renou-Wilson, peatlands specialist at UCD, and Jim Ryan, formerly bogs specialist with the National Parks & Wildlife Service, say much more detail and transparency is needed to assess the plan. They both dispute BnaM’s projections for CO2 emissions.

Ryan also expresses concerns that the focus on climate benefits may be to the detriment of biodiversity. In particular, Renou-Wilson says, “it would be a red flag issue to put windmills on restored wetlands.” She also calls for a robust external review process.

Both point out that many other valuable bogs, on the rest of the company’s estate, and outside it, will continue degrading unless additional measures are taken.

Ryan adds that the existing specialist staffing levels in BnaM “does not come within an ass’s roar of what is needed” to meet the scheme’s targets.

McCorry acknowledges more specialist staff, and a lot of fine-tuning, are needed, but argues “the perfect must not be the enemy of the good”, and insists the scheme will be “iterative, adaptable and flexible”.

There is no gainsaying his commitment, or his expertise. But his analogy of the elephant indicates much bigger thinking is still required by BnaM and by the Government.

If we are to effectively address the climate and biodiversity crises as a national emergency, we must surely bring to it the kind of resources, scientific expertise, energy, skill sets and imagination that the State once invested in the Shannon Scheme for hydroelectric power. Positive as it is, this scheme still falls far short of that commitment.