Before spears or arrows, humans ‘threw stones’ to hunt 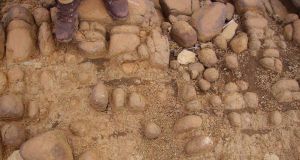 Rocks used as throwing weapons must be heavy enough to do damage but light enough for a high speed throw. Photograph: Andrew Wilson et al 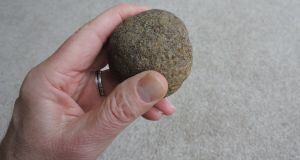 Researchers found 81 per cent of the stones were capable of inflicting damage over 25m. Photograph: Andrew Wilson et al

It is dinnertime, you feel hungry but there is nothing to eat. What do you do? If you are a prehistoric hunter, you start throwing stones.

Most archaeological sites around the world dating from 1.8 million years ago to at least 70,000 years ago have “spheroids” present, round or almost round stones most likely used as throwing weapons.

Researchers led by Dr Andrew Wilson of Leeds Beckett University and colleagues decided to analyse 55 spheroids to assess just how effective they might have been in bringing down game.

Those studied were recovered from the Cave of Hearths in the Makapan Valley, South Africa.

The research team assumed the stone age people who used them were expert throwers otherwise the spheroids might not have been present in so many sites. They developed simulations of the damage likely with a well-thrown stone at a prey animal such as an impala.

They found that 81 per cent of the stones were capable of inflicting damage over distances of up to 25 metres. The researchers, who included colleagues from the Universities of Wyoming, Liverpool and Indiana University ruled out the idea these might have been used as a hammering or grinding tool.

It was not simply a matter of having the heaviest stone possible, the stones were all light enough for easy throwing while still capable of doing damage to prey, the authors write in the journal Scientific Reports.

Our arms seem built for the job of throwing the researchers suggest. “Humans are uniquely specialised for throwing, both anatomically and psychologically,” Dr Wilson said.

Stone throwing worked for hunting and for driving off competing carnivores, the researchers say. You could hunt for prey at at a distance but also reduce the risk of dangerous prey getting that little bit too close.

There was some skill involved in choosing suitable stones, Dr Wilson said. They needed to be heavy enough to cause damage but light enough to achieve a high speed throw.

“Our research has shown modern humans to be exceptionally good at this task,” he said.

Spheroids worked well until newer technology arrived, the flint-tipped spear and the bow and arrow.