Bacteria and bugs in guts and gallbladders 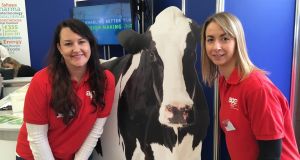 We hear a lot about the bacteria that live in our guts, but you are interested in bugs and gallbladders – why is that?

The gallbladder makes a substance called bile, which helps us emulsify fats from our diet. At this point, science doesn’t know much about the bacterial communities or “microbiota” associated with the human gallbladder and its disease states. Although thousands of people every year have their gallbladders surgically removed, we still don’t know whether there is a bacterial origin of infection, or if the absence of the gallbladder after its removal causes downstream changes in the populations of bacteria living in our guts. So I am working with Mercy University Hospital in Cork to start to find some answers. We are part of an EU-funded Marie Curie project called GallBiome, which is looking at the relationships between gallbladder microbiota, gut microbiota and human health.

How did you become interested in the bacteria that call us home?

My PhD research in oil-rich Oklahoma focused mostly on the corrosive activities of bacteria in petroleum pipelines. After discovering dozens of new species of anaerobic bacteria, I started looking at the various ways they contribute to environmental processes and human health.

I came to Ireland to work on faecal transplantation – the idea that we can change our gut microbes by transferring faeces from healthy donors to diseased patients suffering from gastrointestinal diseases. Surprisingly, I faced many of the same challenges as I had seen with my work on the petroleum pipelines. Bacterial corrosion in oil pipelines is much the same as the “corrosion” of our diseased intestines, and both need microbiologists to find treatment therapies.

You have been in Ireland for nearly two years now – what stands out?

In many ways Ireland is similar to Oklahoma – the people are very kind and the cities are surrounded by farmland. My husband and I knew that we wanted to spend some time living in Europe, so when the opportunity presented itself to work for one of the leading scientists in the field, Prof Catherine Stanton, we didn’t hesitate to move. Ireland is a great launching point for seeing [more of]the world, and I have experienced some wonderful holidays since discovering Ryanair. Plus, I’m really loving my tea breaks!

You were at the National Ploughing Championships recently – how did that go?

It was a particularly fun event where we got a chance to speak to the general public about positive health benefits of the bacteria in and around us. I was surprised by the sheer magnitude of the event and was continually impressed by people’s interest in our research. These kinds of outreach activities help bring the lab to the people, which is important for translating science as a concept to a tangible benefit for humanity. Plus, it felt like an official initiation for me in into Irish life!

Can you see ways that we could better support early-stage researchers like yourself?

Ideas are sometimes the easy part, but acquiring the funds to support your experimental endeavours is hard. Researchers at every stage could greatly benefit from additional training in grant-writing, something most of us dread.

What do you think you would like to work at if you were not a scientist?

I feel a deep service to science and discovery, so I don’t think I could ever envision myself without a lab coat. Although I’ll admit that I have my days where running a T-shirt shop sounds pretty relaxing. Science themed T-shirts anyone?