Arabic enlightenment and the emergence of algebra

That’s Maths: Developments made during the Golden Age of Islam laid the foundations of scientific theories 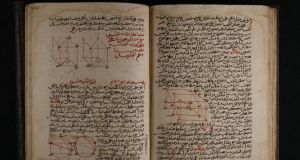 Some years ago a book with the title How the Irish Saved Civilisation was published. It told of how, by copying ancient manuscripts, Irish monks preserved the knowledge of ancient times through the Dark Ages, when Europe was plunged into ignorance and turmoil. Far to the East, a more extensive rescue operation was under way.

Evidence of Arabic science, the science practised by the scholars of the Islamic Empire, is all around us. For example, most of the stars in the sky have Arabic names. We owe a huge debt to the achievements of the scholars of the Arabic world. The scientific revolution in 16th- and 17th-century Europe depended greatly on the advances made in mathematics, physics, chemistry, medicine and philosophy in the medieval Islamic world.

Following the arrival of Islam in the early seventh century, an empire with a flourishing civilisation, the Golden Age of Islam, emerged. During this period, Arabic was the language of international science and mathematics across a region stretching from India to Spain.

After the foundation of Baghdad in AD 762, an enormous programme of translation was started, in which the great works of India, Persia and Greece were translated into Arabic. Baghdad became a centre of enlightenment, culture and learning, with the House of Wisdom, established by Caliph al-Ma’mun, playing a role similar to the earlier Library of Alexandria.

One of the greatest scholars of the Golden Age was the Persian mathematician Muhammad ibn Musa al-Khwarizmi. In about AD 820 he worked in the House of Wisdom, where he wrote several astronomical and mathematical texts. One of his works, giving an account of the decimal system of numbers, is based on the earlier work of the Indian mathematician Brahmagupta. After al-Khwarizmi’s book was translated into Latin, the decimal system of numbers was popularised in Europe by Leonardo of Pisa, also known as Fibonacci, in his Liber Abaci.

Al-Khwarizmi’s greatest work was Kitab Al-Jebr, translated as The Compendious Book on Calculation by Completion and Balancing. In this book, quadratic equations are solved by the process of completing squares; the method taught in schools to this day. The term “al-jebr” in the title gives us the word algebra. The text played a role for algebra similar to that played by Euclid’s Elements for geometry: it was the best text available on the subject until modern times and it gave a new direction to the development of mathematics.

There were good reasons for developing new mathematical methods, which, according to Al-Khwarizmi, “men constantly require in cases of inheritance, legacies, partition, lawsuits and trade”. He also considered practical problems such as measuring land and digging canals.

Had it not been for the translation programme during the Golden Age of Islam, we would not have access today to many mathematical texts of the Greeks. Moreover, the knowledge transferred to Europe in the Renaissance was richer in many ways than that inherited by the Arabs from Greece, Persia and India.

The unique collection of the Chester Beatty Library in Dublin includes some 2,650 Arabic manuscripts. They cover religion, geography, medicine, astrology, mathematics and more, with original works and translations from ancient Greek. A complete history of Arabic mathematics is not yet possible, as many manuscripts remain unstudied. The current exhibition at the library, Chester Beatty’s A to Z, features works on optics and astronomy.