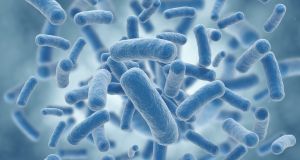 The danger is drug-resistant bacteria could get back into humans and cause infections that would resist treatment, the researchers from NUI Galway warn. File photograph: Thinkstock

In the first study of its kind in Ireland, researchers have found both antibiotic drugs and antibiotic-resistant bacteria in discharges from sewerage systems, something that could impact on human health.

It is very difficult to stop this, given the drugs come mainly from the urine and faeces of people taking important medicines. People flushing unused drugs down the toilet, however, are contributing to this problem, the researchers say.

Antibiotics provide a crucial service saving millions of lives a year by knocking out infections, but improper use is gradually rendering them useless.

Allowing the release of antibiotics into the environment makes things worse by encouraging the growth of bacteria resistant to these drugs.

The danger is drug-resistant bacteria could get back into humans and cause infections that would resist treatment, the researchers from NUI Galway warn.

“Antibiotics going into the environment may contribute to making bacteria antibiotic-resistant,” says Prof Martin Cormican, professor of bacteriology at Galway, who led the study.

“These organisms could then get back into people in food or water, and if they cause infection they become harder to treat,” he says.

He has written to the Minister for Health three times, encouraging him to introduce safe ways for people to dispose of unused medicines.