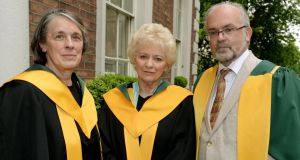 The short-term needs of the economy should not detract from the long-term goal of creating an “intellectually stimulating” third-level education system, the president of the Royal Irish Academy (RIA) has said. Luke Drury was speaking at the admission of 20 members to the academic institution, including Chief Justice Susan Denham and former Northern police ombudsman Nuala O’Loan, both in the humanities.

On the restructuring of the third-level system announced this week, Prof Drury said he was “broadly encouraged” by the proposals.

“Looking to the students of tomorrow, who will sit their first Leaving Certificate paper in five days’ time, we must surely wish for them a future as engaged citizens in a smart society and not just alienated workers in a smart economy. As the Minister has outlined, this can only be achieved if we have equitable access to an intellectually stimulating third-level system.

“Even if the immediate priority has to be the rebuilding of the economy, our long-term aim should be to make Ireland one of the most culturally rich and intellectually stimulating places in the world, an island of creative ideas capable of attracting the brightest and most interesting minds from around the world.”