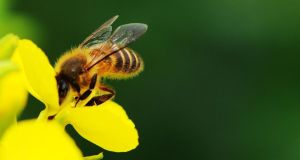 The native Irish honeybee may be returned to the wild for the first time if plans for a dedicated research centre at NUI Galway (NUIG) bear fruit.

There are currently no wild populations of the honeybee here, and the global food economy is seriously threatened by the decline in pollinators worldwide.

Disease and pesticide use are the main threats to populations of pollinators such as the bumble and honey bee and hoverflies.

The Nosemosis disease, which is strongly linked with a syndrome known as collapse disorder in honeybees, is due to be discussed at a beekeepers’ workshop in NUIG today.

A research team led by head of zoology Dr Grace McCormack is working with Irish firm Advance Science to try and tackle the disease, using microscopy and DNA sequencing.

Honeybee populations in one in every three hives are dying out each year, according to Dr McCormack.

She said that there was still no established link between pesticide use and colony collapse disorder, but pesticides weakened the immune systems of pollinators. “We are hoping to co-ordinate efforts with beekeepers and help them to identify disease,” she added.