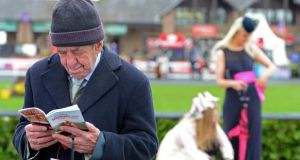 Into each race meeting, a little rain must fall. It was too much to expect after Tuesday’s gloriously sunny opener to the National Hunt Festival at Punchestown that the weather would hold yesterday, and it didn’t.

The second day of Punchestown was accompanied by dank and rainy conditions but it was still a vast improvement on the same day last year when the Gold Cup had to be postponed because of gale-force wind and rain.

It was a day for that particularly Irish incongruity: fake tan and cloudy skies. Many of the ladies shivered in their finery.

“I felt a bit of warmth yesterday and I thought, yeah, summer’s here,” said Lorraine Keane, one of the judges of the best-dressed lady competition. “None of us knew what the weather was going to be like. My toes have been frozen since midday.”

That best-dressed lady yesterday was Lucan garda Rebecca Daly, who wore, appropriately for the weather that was in it, a monochrome outfit consisting of a black-and-white Coast dress and a H&M jacket.

It wasn’t just the weather that was cool yesterday. The usually animated Michael O’Leary was the coolest customer in the parade ring as he watched his pride and joy, favourite Sir Des Champs, hold off the brave challenge of Long Run to land the feature race – the Bet Online With thetote.com Punchestown Gold Cup.

Actor James Nesbitt had his own thespian-themed challenger in the race but Riverside Theatre couldn’t repeat the form which saw him win at Cheltenham last year.

“The amount of money that Michael [O’Leary] puts into Irish racing is sensational, important and it keeps racing going,” said Nesbitt, who joked that he had no money to bet.

Among those who turned out for yesterday’s racing were former Irish football internationals Niall Quinn and Steve Staunton, former minister for finance Charlie McCreevy and former RTÉ newsreader Anne Doyle.

It was also a day out for some of the Leinster squad in advance of their Amlin Challenge Cup semi-final against Biarritz. Flanker Sean O’Brien’s family has a couple of half-bred horses and a thoroughbred mare at the family home in Carlow.

“Today is our day off and it is nice to come here and chill out,” he said. He was joined by Fergus McFadden, Seán Cronin and a few of the younger squad members.

Defence Forces commission seeks submissions as part of review 22:31
Klopp says he will not have tantrum over inability to sign a centre back 22:30
Lampard urges Chelsea players to fight their way out of a slump 22:30
Green Party seeks internal consensus on EU-Canada trade deal 22:10
Covid-19: Mutation associated with mink no longer ‘ongoing concern’ – Holohan 21:53