Property values outside Dublin rise by 1.2%

CSO data shows houses in capital worth 1.3% more than in April 2012 as prices up nationally by 0.8% in April 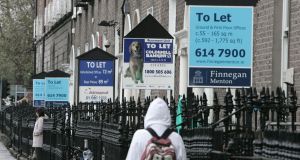 Property prices across the State rose in April but were 1.2 per cent lower than in the same month in 2012. Photograph: Frank Miller/The Irish Times

Residential property prices outside Dublin increased for the first time in four months in April, rising by 1.2 per cent.

The average price of properties in the capital also rose during the month - but at a far slower rate of 0.2 per cent.

The Central Statistics Office’s Residential Property Price Index shows that prices across the State increased by 0.8 per cent in April, compared with a 0.5 per cent drop in March and a 1.1 per cent decline in April of last year.

The month-on-month increase in April suggests that weakness in prices in the first three months of the year was likely a result of the ending of the Mortgage Interest Relief Scheme at the end of 2012.

The pending expiration of the scheme is thought to have provided a temporary boost to demand, and therefore prices, in the final months of the year. However, the bringing forward of purchases is likely to have drained demand temporarily in the first months of the year, thereby causing the reversal of the gains of later 2012.

Property prices were, as a whole, 1.2 per cent lower in April than at the same point last year. The rate of decline in the market has slowed significantly, with the data showing prices fell by 16.4 per cent in the period between April 2011 and 2012.

Dublin apartment prices increased by 1.8 per cent in April but were 2.9 per cent lower than in the same month in 2012. The CSO said this sector suffered from considerable volatility given the low number of transactions involving apartments in the capital. For example, apartment prices were said to have fallen by 7.2 per cent in March.

When apartments are included, property prices in Dublin increased by 1 per cent in the year to April, the CSO said.

Property prices outside the capital were 2.7 per cent lower in April than at the same point last year and were down 1.3 per cent over the previous three months.

House prices in Dublin now stand 55 per cent lower than at their peak in early 2007. Apartments in Dublin are valued at 61 per cent less than they were in March 2007.

Outside Dublin, the fall since 2007 has been less steep but property prices have nevertheless fallen by 48 per cent.

Nationally, property prices are 50 per cent below their boom-time peak.