Priests should be able to marry, says Cardinal O'Brien 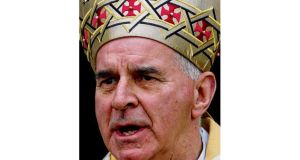 Cardinal Keith O'Brien: says clerical celibacy is not a matter of "divine origin"

Britain’s most senior Catholic, Cardinal Keith O’Brien, has said that priests should be allowed to marry and that younger colleagues should have “the choice”.

Now 74, the Irish-born Cardinal O’Brien, a frequently conservative voice in Scotland, will vote for Pope Benedict XVI’s successor when he attends the Vatican conclave.

“I’d be very happy if others had the opportunity of considering whether or not they could or should be married. It’s a free world,” he told BBC Scotland before his departure for Rome.

Many priests find celibacy difficult, he acknowledged: “ felt the need of a companion, of a woman, to whom they could get married and raise a family of their own,” he went on. “I would like others to have the choice. In my time there was no choice, you didn’t really consider it too much. It was part of being a priest – priests didn’t get married and that was it.

“You didn’t really consider it all that much, you just took your vows of celibacy the way someone else would naturally take their vows of marriage.”

Cardinal O’Brien, who is from Ballycastle, Co Antrim, is the only British-based Catholic who will have a vote in the papal conclave. He is a long-odds bet for the position himself and said there are issues on which the Catholic Church will never give ground, such as abortion or euthanasia.

These are basic “dogmatic beliefs” of “divine origin”, he told BBC Scotland, but clerical celibacy is in a different category: “For example, the celibacy of the clergy, whether priests should marry – Jesus didn’t say that.

He has been a stern critic of the Scottish government’s plan to introduce same-sex marriage – a stance that earned him the title of “Bigot of the Year” from gay rights lobby group Stonewall.