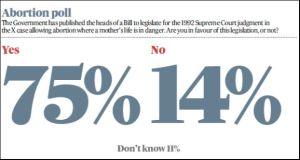 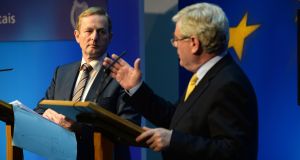 There is overwhelming public support for the Government’s proposed legislation on abortion, according to the latest Irish Times/Ipsos MRBI poll.

The poll also shows that a substantial majority of voters back wider access to abortion than that being proposed in the legislation.

The poll was conducted on Monday and Tuesday of this week as the debate over publication of the detailed legislation was at its height.

The statement from the Catholic bishops opposing the legislation was issued on Tuesday.

Asked if they were for or against the heads of the Bill to legislate for the Supreme Court X judgment of 1992 permitting abortion where a mother’s life is in danger, 75 per cent said Yes, 14 per cent said No and 11 per cent had no opinion.

Supporters of both Coalition parties were the strongest backers of the legislation with 79 per cent of Fine Gael voters favour; 78 per cent of Labour; 77 per cent of Sinn Féin and 74 per cent of Fianna Fáil supporters.

People over 65 were the least enthusiastic about the legislation with 60 per cent in favour and 26 per cent against.

The 25 to 34 age group was the most strongly in favour but there were large majorities across all age cohorts.

The best-off social categories were strongest in support of legislation while farmers and the poorest DE social group were the least enthusiastic.

In regional terms Munster was strongest in favour, followed closely by Dublin with voters in Connacht Ulster least supportive of legislation.

There were big majorities for legislation in all regions, social categories and age groups.

The survey was undertaken last Monday and Tuesday among a representative sample of 1,000 voters aged 18 and over, in face-to-face interviews at 100 sampling points in all constituencies.

The margin of error is plus or minus 3 per cent.

The result shows a small increase in support for legislation to give effect to the Supreme Court judgement compared to the last Irish Times poll in February conducted before the heads of the Protection of Life During Pregnancy Bill were published.

In that poll people were asked in principle if they supported the introduction of legislation to give effect to the X case decision, including the threat of suicide. In response 71 per cent said yes, 11 per cent said no and 18 per cent had no opinion.

Voters were also asked if abortion should be permitted in six specified circumstances. 89 per cent said it should be allowed where a woman’s life is at risk.

Asked if abortion should be permitted in cases where the foetus is not capable of surviving outside the womb, 83 per cent said it should.

Some 81 per cent said abortion should be allowed in cases of rape or abuse, while 78 per cent were in favour in cases where a woman’s health is at risk.

Finally, when asked if abortion should be permitted where a woman deems it to be in her best interest, 46 per cent said it should not,

39 per cent said it should and 15 per cent had no opinion.