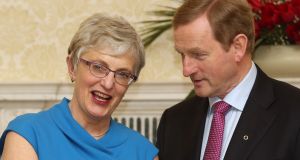 Minister for Children Katherine Zappone has contradicted Taoiseach Enda Kenny on the extent of his knowledge of false allegations made against Sgt Maurice McCabe.

Ms Zappone said that prior to last Tuesday’s Cabinet meeting she spoke with Mr Kenny about the meeting she had with Sgt McCabe and his wife, Lorraine, during which she learned of the false sexual abuse allegations and Tusla’s role in it.

Mr Kenny had on Sunday said Ms Zappone told him she was going to meet the McCabes but made no reference to their conversation prior to last week’s Cabinet meeting.

His spokesman had also said last week that Mr Kenny was unaware of any Tusla role in the McCabe case until an RTÉ Prime Time programme aired last Thursday.

Speaking to reporters at Leinster House on Monday, Ms Zappone outlined the details of a conversation she had with the Taoiseach after her meeting with the McCabes, and prior to the Cabinet meeting.

“I did not go into detail of any of the allegations that I was aware of but I did indicate to him that that was the nature of the conversation,” she said.

Ms Zappone agreed that the discussion she had with the Taoiseach was “vague”, saying she gave no more details other than the outline of the conversation, and the role of Tusla.

She said Mr Kenny had asked no questions.

On Monday night the Taoiseach’s spokesman would not directly address the question of whether Tusla was mentioned in the conversation.

“The Taoiseach was not aware of the details, or of the very serious and disturbing issues that arose at the meeting,” he said in a statement. “As Minister Zappone confirmed, she did not divulge any of the details of these very serious issues to the Taoiseach or to anyone else in Government . . . This was absolutely the correct course of action.”

She also acknowledged some of her Cabinet colleagues had criticised her failure to specifically mention Tusla at the Government meeting last week and that she had “learned” from the experience.

She rejected calls for her resignation. “I am the only Independent woman at the Cabinet table. I bring a unique perspective and want to continue to do that,” she said.

Elsewhere, senior sources in Government insisted the apparent contradictions that have emerged were a side issue and that mention of Tusla in any conversation would not have had the same import or significance last Tuesday as after the Prime Time broadcast on Thursday disclosed Tusla’s role in the handling of the false allegations.

“Everybody is looking at this through a post-Prime Time lens,” said the source. “Earlier in the week, the involvement of Tusla was completely unknown.”