Former Independent and Social Democrats TD is joining FIanna Fáil and will take on the role of Brexit spokesperson. Video: Bryan O'Brien 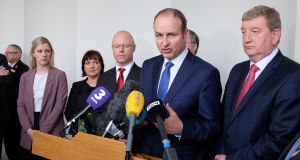 Stephen Donnelly, the Independent TD for Wicklow and founder of the Social Democrats, is to join Fianna Fáil, the party announced this morning. Photograph: Dara MacDomhnaill

Stephen Donnelly, the Independent TD for Wicklow and founder of the Social Democrats, is to join Fianna Fáil.

Fianna Fail TDs were told of Mr Donnelly’s recruitment at a meeting of the parliamentary party in Leinster House on Thursday morning.

It is understood that Mr Donnelly is to be given responsibility for Brexit on the party’s front bench.

However, he left the party last summer after a series of disagreements with his co-leaders Roisin Shortall and Catherine Murphy.

Mr Donnelly had favoured entering into discussions about joining the Fine Gael-led coalition, but this was ruled out by Ms Shortall and Ms Murphy.

He has since sat as an Independent TD but has often told friends and supporters that he believes being part of a political party is a more effective way of achieving his political objectives .

Since leaving the Social Democrats, Donnelly has campaigned on tax avoidance by vulture funds and commercial property investors, leading to a change in the law announced last year and implemented in the Finance Act, which has restricted loopholes exploited by international funds and Dublin law firms on their behalf.

It is also likely to lead to some internal angst in Fianna Fáil, where front benchers will see Mr Donnelly, who enjoys a high national profile and is seen as an effective media performer, as a potential rival for ministerial office should Fianna Fáil return to Government after the next election.

The sitting Fianna Fail TD for Wicklow Pat Casey was given some advance notice of Mr Donnelly’s recruitment, sources said, “though not a lot”.

Fianna Fáil hopes that tension between the two will be minimised, as they come from opposite ends of the constituency. Mr Donnelly’s base of support is in the northern, more urban part of the constituency based in Greystones and Bray, while Mr Casey is strongest in the southern and western parts. Fianna Fáil has previously held two seats in the five-seat constituency.

Whatever internal rumbles there may be, the recruitment of Mr Donnelly is something of a coup for the Fianna Fáil leader Micheal Martin, who has sought to position Fianna Fail in the centre to centre-left ground that Mr Donnelly sought to occupy with the Social Democrats.

It also supports Mr Martin’s efforts to move Fianna Fáil away from the toxic political legacy of the economic crash and the era of austerity that followed it.

Elected to the Dáil as an Independent in 2011, Mr Donnelly is married with two young children. He has a degree in mechanical engineering from UCD, and has spent time at Massachusetts Institute of Technology, Harvard, and the Kennedy School of Government, as well as senior jobs in global consultancy.

His mother was a teacher in Ballinteer, south Dublin, and he worked in the family business, Hickey Fabrics.

He withdrew from the banking inquiry committee in summer 2014 in a row over government insistence on keeping a majority.

Within the Social Democrats, Mr Donnelly had favoured entering into discussions about joining the Fine Gael-led coalition, but this was ruled out by Ms Shortall and Ms Murphy.