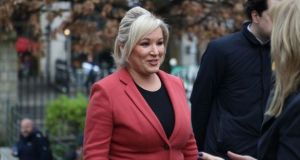 The North’s Deputy First Minister Michelle O’Neill she and other party members were told an attack “could happen anywhere”. Photograph: Nick Bradshaw

Senior Sinn Féin figures in Northern Ireland such as Michelle O’Neill, Gerry Kelly and Martina Anderson have been checking under their vehicles for car bombs in recent weeks.

The Police Service of Northern Ireland (PSNI) warned Sinn Féin of the threat from dissident republicans and, according to the Deputy First Minister, Ms O’Neill, she and other party members were told an attack “could happen anywhere”.

“This is literally a threat against thousands of Sinn Féin members and their families in the North,” she said.

In the distrustful nature of this island some have wondered was this a republican ploy to deflect attention from the discomfiture the party has been experiencing in relation to the murder of Paul Quinn in 2007, a murder his family has laid at the door of the IRA?

But, no, the PSNI is adamant that the threat is serious and genuine, and that the information it has about the dissidents’ plans, particularly those of the New IRA, are well sourced.

“This is a very real and valid security assessment,” a senior police source said.

Time was when the notion of relatively tiny republican organisations challenging the lives of senior Sinn Féin personnel would seem fanciful – and indeed dangerous, to those who would pose such threats.

But the more Sinn Féin became locked into politics and the peace process the more emboldened the dissidents became.

The late former deputy first minister Martin McGuinness faced a number of threats because of his description of the Continuity IRA as “traitors to the island of Ireland” after the 2009 murder of PSNI Constable Stephen Carroll, and for other comments he made disparaging what he tended to call “micro” organisations.

Even close to his home in Derry City dissidents erected a mural with the legend: “Those who administer British rule are traitors. They haven’t gone away, you know.”

In 2018, dissidents threw a crude explosive device into the front parking area of the home of former Sinn Féin president Gerry Adams in west Belfast.

There have been several other incidents of threats against Sinn Féin members over the years, mostly relating to the party’s continuing involvement in the Stormont political process.

This time the ire of the dissidents was stirred by the decision of Ms O’Neill and Mr Kelly to attend the launch of a campaign to recruit 600 new members into the PSNI.

How and why Ms O’Neill and Mr Kelly, Sinn Féin’s policing spokesman, ended up at the launch at the PSNI training centre at Garnerville in east Belfast is interesting in itself.

The launch was on Tuesday February 4th, four days before the General Election in the Republic. Ms O’Neill and Sinn Féin’s three Policing Board members, Gerry Kelly, Linda Dillon and Philip McGuigan had received prior invitation to attend the launch, but had not responded.

On the morning we reporters were gathered at Garnerville waiting to see what would happen, knowing there would be a story either way: that ahead of the election and already under the cosh over the Paul Quinn murder Sinn Féin would snub the launch and thus trigger another almighty election row in the Republic; or it would finally make history by for the first time attending the launch?

The event started at 10am and there was no sign of Sinn Féin. The DUP, the Ulster Unionists and the SDLP at that stage had representatives in the room. PSNI chief constable Simon Byrne and chairwoman of the Policing Board Anne Connolly were figuring what lines they would use to respond. Would it be “disappointment” or something stronger?

Then well into the event we heard that Ms O’Neill and Mr Kelly would make their way from Stormont to the launch. Ms O’Neill and First Minister Arlene Foster had the excuse that they were delayed by a Brexit meeting at Stormont, although that could hardly apply to the three Sinn Féin board members. Ms O’Neill and Mr Kelly arrived after 11 am when the launch was completed. But nonetheless they posed with Ms Foster and the chief constable and other Policing Board members holding posters urging people top join the PSNI and “make it a career”.

Having bitten the bullet, so to speak, O’Neill didn’t hold back when speaking to the press in front of a big PSNI recruitment banner. Asked was it a “last minute” decision to attend she said “I want to be here”, while commenting about the need for a representative police force, and calling for a return of 50:50 Catholic/Protestant recruitment.

While Sinn Féin signed up to policing in 2006, its support for the PSNI has at time been lukewarm and overly cautious. So this was a big shift.

It seems reasonable to argue that this would not have happened but for the General Election. Sinn Féin would have been hammered had it been seen as half-hearted or worse in supporting policing in Northern Ireland.

Not so the dissident elements. Even by the New IRA’s standards some woeful anti-recruitment posters were erected in Derry featuring pictures of Peadar Heffron, the Irish speaking, GAA-playing, Catholic officer who was deliberately targeted and terribly injured by a dissident bomb in 2010.

In west Belfast the offices of the Andersonstown News were picketed by a handful of protesters complaining about the paper’s decision to run the PSNI recruitment adverts. They carried a banner describing the paper as “British State Media”.

And then there were the threats against the likes of Ms O’Neill and Mr Kelly, and Sinn Féin politicians generally.

But while annoyed with the dissidents, Sinn Féin on the ground hasn’t retreated from its decision to attend the recruitment launch.

A senior Sinn Féin source said that “by and large” the party has not been getting grief at local level. “I have not had a single relative or friend bring it up with me when I’m out and about, and they are usually the indicator. Because if something is exercising people they are the first one to tell you. None of us has been getting any hassle,” he said.

Another well-placed source said that the “feedback Sinn Féin has got has been quite positive within the leadership and from the grassroots”.

He said that if the stultifying issue of the PSNI having also to deal with legacy issues “could be taken from the cops there could be a quantum leap in terms of support”.

Still, persuading more Catholics to join the PSNI continues to be difficult, particularly when doing so means that, mostly, young Catholics have to abandon their local community, their GAA club, and some of their social circle of friends and change their lifestyle. That is the bald reality.

“If we can solve that problem, that people are accepted in their local community and other people are defending them, then we will get over the line, but we are a while away from that yet,” said a senior PSNI source.

But the PSNI and others who want Sinn Féin to commit more decidedly to policing are happy with this Sinn Féin response, and how they haven’t resiled from endorsing the recruitment campaign. They see it as a significant step up.

They know too that the General Election in the Republic and the new demands on Sinn Féin have assisted that process.

“I don’t think this is cynical by Sinn Féin, I think it is timely,” said the PSNI source. “The reality is they can’t go into government in the South without dealing with full endorsement of the PSNI in the North. They just can’t do it. The Special Criminal Court stuff, the Guards, all that will play into the discourse and the media will strip them apart. I actually think this is an issue that they have to grasp. If they are on the fringes of getting into government, or at least going into strong opposition, they need to be more credible on policing.

“I think all this serendipitously ties into where we are at the moment.”