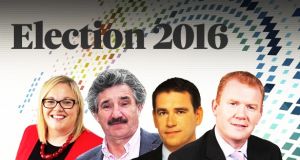 Fine Gael Minister of State Paudie Coffey and Labour backbencher Ciara Conway were the big losers in Waterford, where a resurgent Fianna Fáil topped the poll and Sinn Féin claimed its first seat in almost 90 years.

Mr Coffey was narrowly edged out of the last seat by party colleague John Deasy, who held on to a slim advantage over his rival through nine counts.

City based TD John Halligan, standing for the Independent Alliance, claimed the third seat with a significantly improved performance on 2011.

First-time general election candidate Mary Butler was elected on the first count for Fianna Fáil with more than 10,600 first preferences, a 20 per cent share of the vote. A community activist and mother of three from Portlaw, Ms Butler campaigned mainly on hospital and housing issues.

Sinn Féin Senator David Cullinane almost doubled his vote to capture the second seat in the constituency, though he had to wait until the sixth count to claim victory. This is the first time Sinn Féin has been represented in Waterford since Caitlin Brugha was returned in 1927.

Ms Conway had a disastrous performance with less than 5 per cent of the vote in a constituency which has traditionally had a Labour TD. By the time she was eliminated, she had been passed out by the Green Party’s Grace O’Sullivan.

The main drama at the count centred on the battle between Mr Deasy and Mr Coffey. More than forty years after their fathers slugged it out for the Fine Gael nomination, the two men were forced to scrap for the last seat after the party’s vote slumped.

Mr Coffey started with a 400-vote deficit against Mr Deasy in the first count but was expected to gain ground as minor candidates were eliminated. In the event, the margin widened to 500 votes by the eighth count when both Ms Conway and Ms O’Sullivan were eliminated.

The ninth and final count became a formality with being elected without reaching the quota, 567 votes ahead of Coffey. By then Mr Coffey had left the count centre and the cheers for Mr Deasy were muted.

His victory means the continuation of a record that has seen this constituency represented by a member of the family - John or his father, Austin - continuously since 1977.

Meanwhile, an investigation has been ordered into the rejection of 72 ballot papers in Waterford because they were not stamped.

Presiding officer Niall Rooney has told candidates he plans to investigate the failure of staff to stamp ballot papers as required before they are handed to voters.

Mr Rooney said it was not clear at this stage whether the problem with unstamped ballot papers arose in a small number of locations or was more generalised across the county. However, he promised whoever was responsible would not work on future elections.

The 72 unstamped ballots were among 400 spoiled votes in the constituency.