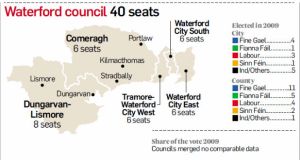 Several sitting councillors are facing the chop as the number of seats in the new body is cut from the combined total of 38 in the old councils to 32 in the new regime.

In all 73 candidates are contesting the 32 seats, with Fine Gael fielding 14, Fianna Fáil 12, Labour six, Sinn Féin eight, the Workers Party three, Direct Democracy Ireland three, People Before Profit one, and 26 Independents, including six outgoing councillors. The issues on the doorsteps are mainly national: medical cards, property tax and water charges. There is some concern too about local issues such as the status of Waterford Regional Hospital, the merger of the two councils, as well as pylons in the county.

In Waterford City East, eight sitting councillors and seven other candidates are vying for six seats. Fine Gael is likely to lose a councillor, while Independent councillor Davy Daniels will do well, as should Sinn Féin’s Cllr Pat Fitzgerald.

Fianna Fáil’s sole representative on the old city council, Adam Wyse, should hold the seat won by his late father, but Labour’s councilor Jack Walsh and Independent councillor Mary Roche could battle for the last seat. In Waterford City South, Sinn Féin will take at least one of the six seats through Cllr John Hearne, while Fine Gael’s Cllr John Cummins and Labour’s Cllr Séamus Ryan are also well placed to hold their seats . The final three are likely to between Fianna Fáil, Sinn Féin, the Workers Party and Independents such as Cllr Seán Reinhardt and long-serving Independent, Cllr Cha O’Neill .

Six-seat Comeragh is the most predictable with Fine Gael set to take at least two seats, Fianna Fáil also on course for two, while Labour councillor Ger Barron should hold on. Fine Gael is fancied to take the last seat ahead of Fianna Fáil and Sinn Féin.


Pressure eased
The pressure has been eased in Dungarvan-Lismore for sitting councillors by the fact that four of their colleagues including Labour veteran, Billy Kyne is not running – the first time the Kyne name is not on a ballot there since 1947.

Fine Gael should take three seats, including Mayor of Co Waterford Damian Geoghegan, while Fianna Fáil’s Tom Cronin and James Tobin should also be returned. Labour should take one, as should Sinn Féin, with Fine Gael and Labour possibly fighting for the last seat.

Overall, most parties will do well to hold what they have, but Fianna Fáil look to gain in the city, while Sinn Féin is likely to gain in both city and county.