Warm welcome for Coveney as he gets Brexit backing in Paris

UK’s EU departure minister fears if backstop ‘triggered, we would be locked in it forever’ 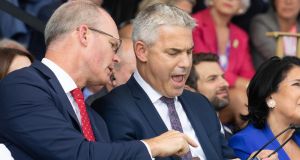 Minister for Foreign Affairs Simon Coveney received an “absolutely 100 per cent” guarantee of French support for Ireland’s position regarding the necessity of the backstop in talks with prime minister Edouard Philippe on Wednesday.

Mr Coveney is touring European capitals to shore up understanding of Ireland’s insistence on the backstop, which seeks to guarantee that there will be no hard border on the island.

He began his conversation with Mr Philippe by saying: “We are conscious of the fact that Irish specific issues are preventing a deal between the EU and the UK, and Ireland doesn’t want to be the problem here”.

Mr Philippe interrupted him and said: “Look, you don’t need to worry about this. This is not just an Irish problem. It’s an EU problem and we are in it together.”

Mr Coveney told The Irish Times “the solidarity is very strong . . . absolutely 100 per cent. Unless the British government changes its approach here, we are heading for a no deal; and I think that is accepted in France.”

“I am very careful not to get involved in the functioning of Westminster, the government and the opposition,” he said. “Ireland has enough to do to make the case for protecting Ireland . . . the British parliament has to try and figure out a way of resolving these issues for themselves.”

“The process of the UK leaving the EU illustrates how important EU membership is to a country like Ireland,” said Mr Coveney, adding that the withdrawal agreement and backstop cannot be renegotiated.

It is lose, lose, lose. Britain loses. Ireland loses. Every country in the EU loses

Even if the EU wanted to renegotiate, he said, it could not be done in the short time available.

He also reminded the audience that the British and Irish governments were co-guarantors of the Belfast Agreement and quoted French president Emmanuel Macron saying last week that the Border issue was “not just technical constraints or legal quibbling but genuine, indispensable guarantees to preserve peace and stability in Northern Ireland and the integrity of the EU single market”.

Mr Johnson’s demand that the backstop be abolished “is something we cannot and will not support”, said Mr Coveney to applause.

If a no-deal Brexit occurs, he said “it will be the choice of the UK government and British parliament . . . No amount of political grandstanding, or attempts to shift the blame, change this . . . in a no deal scenario, everybody loses. It is lose, lose, lose. Britain loses. Ireland loses. Every country in the EU loses.”

Mr Barclay said he wanted “to be absolutely clear about the UK’s position at such a critical time”.

He preferred to speak in English because he “would not want anything to be lost in translation.”

Mr Barclay said the backstop must be removed from the withdrawal agreement because “parliament will not allow the people of Northern Ireland to be subject to an indefinite period of continued alignment [with EU regulations]”.

He continued: “It would mean Northern Irish voters, UK citizens, being governed by laws in which they have no say.”

Mr Barclay claimed that after Brexit, the UK could leave the backstop only with the EU’s agreement.

Creative and flexible solutions will always be quickly shot down

“Once it is triggered, we would be locked in it forever . . . which indeed makes it harder to leave the backstop than it does the EU itself,” he said.

He said that “despite what the UK government is now saying about the agreed backstop, it is supported by a large majority in Northern Ireland – the people it is there to protect”.

Mr Barclay said Ireland and the EU were looking for “more than 100 per cent certainty, all weather, all of life insurance” that there would be no border in Ireland.

“Creative and flexible solutions will always be quickly shot down,” he said.

Mr Coveney said: “They want us to replace . . . an agreed solution that we all know works . . . with a promise that we’ll do our best to address this issue, without telling us how.”

Mentioning Mr Johnson’s promise that the UK will not put up any infrastructure on the Border, Mr Coveney added: “That’s the kind of conversation I would have with my six-year-old child, that ‘I won’t do it if you won’t do it’, despite the fact that the rules of trade require it.”