Jennifer O'Connell speaks to mothers attending the "Turtle Tots" baby and toddler swimming class in Dun Laoghaire and asks what are the important issues for them in this election. Video: Bryan O'Brien 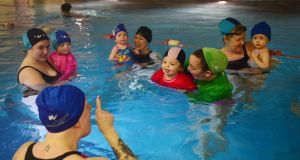 The Thursday morning regulars are togged out and ready for their swimming lesson in the pool at the Royal Marine Hotel, in the four-seater Dún Laoghaire constituency.

Annie, Ruairí, Sebastian, Rory, Shea and Benjamin don’t have a lot to say about the election – but then, with an average age of eight months, they don’t have all that much to say about anything. For the parents getting them ready for their Turtle Tots class – which is designed to introduce infants and toddlers from three months to the basics of water safety – there’s one issue dominating discussions.

It was Bill Clinton’s strategist, James Carville, who mastered the art of the three-word campaign slogan: “The economy, stupid.” Here, in a constituency with creche fees that are the highest in the country, at €256 per week, it’s childcare, stupid.

The first to arrive for the 10am class are Ruth Daly and seven-month-old daughter Annie Kelly. Daly is undecided about the election, and wrestling with bigger decisions personally than how to vote on February 8th. She is due back to her job as a nurse from maternity leave in April. Her partner is also a nurse, which makes finding childcare that works for them even more problematic. “We can’t afford childcare,” she says simply.

And because they’re both nurses, “a creche doesn’t really work for us anyway. The hours don’t work; they don’t match.”

The choice is stark: “Either one of us doesn’t go back to work, and we save that money”, or “we just have to find a way to make it work [with the help of] family members, if we can”. But she wants Annie’s grandparents “to be her grandparents; you don’t want them to be childminders”.

“So the best solution at the moment is that, because we’re both working in the same hospital, we would probably try to work opposite shifts. So we won’t see each other, but we’ll see her, and she’ll be looked after.”

Housing is also a worry. They have calculated that a mortgage would be cheaper than renting, and have been saving hard for a few years to buy a home. But they don’t feel they’re getting any closer to making that a reality. “It’s proving very difficult in terms of what’s available to us. I know that there are [help to buy] schemes available for new builds, but the new builds coming into the market are still too expensive for our budget.”

She watched the debate during the week, but she wasn’t won over by anything promised by either Taoiseach Leo Varadkar or Fianna Fáil’s Micheál Martin on the housing front. She’s worried that Fianna Fáil’s proposed new special savings incentive allowance (SSIA) to help first-time buyers save for a deposit and Fine Gael’s €30,000 promised tax break “will possibly drive prices up anyway”.

How does the future look for her and her family? “It looks as if it’s going to be a struggle, to be honest. Owning my own property; having my baby looked after; staying in the healthcare system as a nurse. Every single way I look at it, it’s difficult. I said on a whim last night: We’ll just go to Canada, we’ll just leave.”

That’s a recurring refrain among her friends, she says. “Young people here that want to start their families and their lives are saying, let’s just leave.”

She looks at her daughter. “Maybe if this one hadn’t come along, we maybe would already gone for a year or two years. Saudi Arabia is definitely calling a lot of my friends and colleagues. We can still go. We can still pack up with little one and go.”

With only two of the four incumbent TDs standing again here – meaning Fine Gael’s chances of holding on to its three seats are dramatically reduced – Fianna Fáil and the Greens will be both hoping to win over undecided voters. All of the parents who speak to The Irish Times on Thursday fit that category; none have yet been swayed yet by the promises of any of the 13 candidates.

As she wraps 10-month-old Ruairí in a towel after his swimming class, Siobhán Gannon says she does know what she wants to ask canvassers who might call to her door. The first question is about insurance. “How are they going to address insurance costs? There’s one insurer left in Dublin to insure childcare, soft plays, bouncy castles – all the things young families want. After that, it’s ‘what can you do for young families?’”

She’s also wrestling with the cost of childcare. “I’m due back at work next week, and it’s a big decision whether I’ll go back or not. The cost of childcare is almost the same as what I earn . . . So that’s a big consideration. I spent many, many years in college and I’ve done a PhD. Did I really spend all those years studying to not work, and to not set a good example to them?”

As she makes up her mind, she’ll be looking for “positive suggestions instead of rhetoric . . . Let’s look to other countries and cherry pick the best solutions.”

Once again, childcare is among the key issues for Murieann O’Donnell, mother to Rory, and Brona Karlsson, who’s here with her son, Sebastian. Other “key issues for all families will be healthcare, education and housing crisis, particularly for young families. They’re all having to move out of Dublin,” says O’Donnell.

Rising insurances costs means parents how have a new worry to add to their list: “It’s in the back of your mind. What happens if the creche has to close?”

Sebastian is Karlsson’s second child. Among the parents here, she alone sounds a warning note about the economy – specifically, she is concerned about the Government’s ability to attract multinationals outside the tech sector.

“We need to think global, and I’m just not sure that in every sector we do. I appreciate in tech that there are a lot of companies here, but I think that it’s quite limited. We have such a well-educated, well-rounded cohort of people coming out of third level, and I just think that if we just had the diversity of jobs to offer them, Ireland could really prosper.”

Environmental concerns are important to her too. Might that translate into a first-preference for the Greens? She thinks about this briefly. “Yes . . . As Greta Thunberg says, what we do now, we can’t undo. So it’s going to affect their future.”

It was the promise of good employment prospects, the chance to own their own home and a better quality of life that attracted Kristi Fetherston, who came to Ireland with her Mayo-born husband last March from New York. Their son, Shea, was born here. “He’s the reason we came,” she says, as he falls asleep in his carseat after a vigorous swim.

So far, they’re happy with the decision, and “how welcoming everyone has been. It’s the little gestures. People eager to hold the door for the stroller. People eager to offer to hold him, or just to give me a kind nod when he’s crying on the train.”

There have been some rude awakenings too, however. “One of the reasons we left New York city was because we expected the housing to be more affordable. And I . . .” her voice trails off. “It’s shocking actually. It feels a bit like New York city.”

As an American citizen, she won’t be voting, but her Irish husband will, and they’ve been talking about the issues at stake. Beyond housing, “I think there are not nearly enough creches. I’m on a million waiting lists . . . even the policies around wait lists for creches and schools feel a little crazy. I’d like to see something to take the stress and anxiety out of that.”

Kristian Oglend, who’s here with his son, Benjamin, is the only father at the pool this morning. From Norway, he won’t be voting in the election either, but he does have a few things on his wish list for families.

The family relocated to Dublin for his wife’s job, and he likes it for its playgrounds, friendliness and free GP care for under sixes, but he has been dismayed by how inaccessible buildings are for wheelchair users and buggy pushers. And – once again – there’s childcare. In Norway, he says, the average cost per child is €3,400 per year. “Here you pay €1,000 per month. That’s crazy.”