VAT cut for developers would repeat mistakes of past – Minister 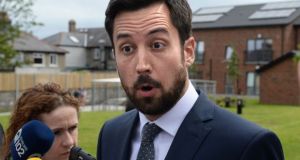 Eoghan Murphy: ‘We made certain mistakes in the past that we do not want to repeat.’ Photograph: Dara Mac Dónaill

Minister for Housing Eoghan Murphy has said that introducing tax breaks for developers would take the country back to the past and confirmed the idea had been ruled out.

The initiative was proposed by Fianna Fáil TD Barry Cowen who is seeking a reduction in VAT to nine per cent for three years.

Mr Murphy said the Government would not be accepting Mr Cowen’s proposals.

Speaking to the media on Wednesday, the Minister said: “We made certain mistakes in the past that we do not want to repeat.”

A move on VAT would see the current rate of 13.5 per cent be temporarily reduced to 9 per cent, and would decrease the estimated €300,000–€330,000 it currently costs to build a house in the greater Dublin area.

The VAT reduction would apply only on residential properties sold below an affordability threshold.

Mr Murphy said he would have no confidence that such a move would result in more affordable houses for people.

The Government would be smart with how it is using its resources, the Minister added.

Fine Gael also proposed the same policy of reducing VAT on construction during talks on government formation last year, but Minister for Finance Paschal Donohoe has set his face against it. Mr Cowen said it would cost €240 million.

Mr Cowen said the three year cut would “stimulate activity in order for [builders] to be in a position to build more homes”.