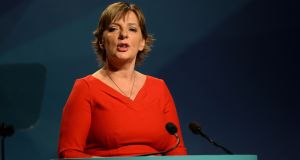 Irish ministers can speak Irish and have it translated at European meetings, but only with prior notice and in practice, few ever speak Irish. The Sinn Féin MEP Liadh Ní Riada (above) has made a number of speeches in the European Parliament in Irish. File photograph: Dara Mac Dónaill

The cost of translating European Parliament documents into Irish is almost twice the average rate for all languages, the parliament has confirmed as its Budget Committee voted on Wednesday to provide more money for the translation service.

The parliament has a team of translators which produce official documents in the 24 official languages of the European Union. To supplement this, it uses the services of external translators.

However, the volume of translation work done this year has meant that the budget for external translators is almost spent and the Budget Committee on Wednesday authorised a transfer of resources from other budgets to allow the translations to continue.

However, an official report seen by The Irish Times warns that more cash may be needed in the coming months. It cites the high cost of external Irish translation - currently €43 per page, almost twice the €22 average cost - as a reason for budget overruns.

Demand for external translation services may mean a budget overshoot of €3.7 million by year’s end, the report says. An initial supplementary budget of €1.5 million has been authorised, though further transfers may be required in the autumn. The money comes from spare capacity under other budget headings, including travel expenses.

A spokeswoman for the European Parliament in Brussels said that budgets at the beginning of the year were “calculated very tightly”. The parliament document confirms that the number of pages translated has exceeded all estimates.

Some of the demand for translation comes from public submissions to a project called My House of European History, which invites European citizens to submit their stories to be published on a website.

Irish has been a full official language of the EU since 2007, after an intense lobbying campaign by the then Government. However, it is not due to become a full working language of the EU until 2022. Until then, Irish is being gradually introduced into EU business, though the process is hampered by a lack of translators.

Irish ministers can speak Irish and have it translated at European meetings, but only with prior notice and in practice, few ever speak Irish. The Sinn Féin MEP Liadh Ní Riada has made a number of speeches in the European Parliament in Irish.

Irish language campaigners have estimated that almost 200 full time jobs for Irish translators will be created when the language becomes a full working language of the union.